The group was constituted in May 2003 in St. Petersburg in an action called “The Refoundation of Petersburg.” The name of the group derives from a novel by the Russian 19th century writer Nikolai Chernyshevsky, and immediately brings to mind the first socialist worker’s self-organizations in Russia, which Lenin actualized in his own publication, “What is to be done?” (1902). Chto Delat sees itself as an artistic cell and also as a community organizer for a variety of cultural activities intent on politicizing “knowledge production”. The activity of collective takes responsibility for a postsocialist condition and actualization of forgetten and repressed potentiality of Soviet past and often works as a politics of commemoration. The collective make a strong focus on the issue of cultural workers labour rights and politics of comradeship.

In 2013, Chto Delat initiated an educational platform—School of Engaged Art  and also provides resources for a social center in Saint Petersburg called Rosa’s House of Culture. Since 2017, the Chto Delat collective, together with colleagues from Germany, founded the not for profit association in Berlin Chto Delat e.V., which allows to expand its work through institutional international funding, which was distributed to various projects in Russia and to the support of activist initiatives through the Mutual Aid Chto Delat Fund.

In 2014 the collective withdrew from the participation in Manifesta 10 in Petersburg as a local protest against the developing the Russian military intervention in Ukraine and annexation of Crimea and with this act has triggered a current debate on the participation and boycott of art events.

The activity of Chto Delat artistic cell is realizing across a range of media—from video and theater plays, to radio programs and murals—it include art projects, seminars and public campaigns. The works of the collective are characterized by the use of alienation effect, surreal scenery, typicality and always analyses of a concrete social and political struggles. 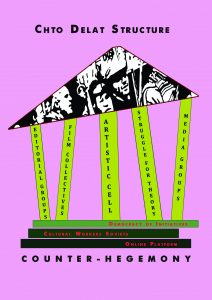