Poor Dialectics, Festival of the School of Engaged Art, Rosa House of Culture #2016

poverty/poor/the poor/ – addressing these concepts immediately places us within the harsh confines of dialectical relations. It compels us to think in terms of oppositions:

We know that the problem of poverty relates to theology – a certain religious view of the way the world is organized, though at the same time liberation theology sees in poverty both the source of sin and the potential for salvation. But not the kind of salvation that translates certain qualities into their opposites (that which is poor becomes wealth and strength); salvation understood as a mystical, transformative event, negating all divisions and leading to the creation of a new world, in which the oppositions of the previous world have been dismantled. How can that happen? In the past, this type of transformation was called revolution, the coming of the messiah, or kenosis. The term “kenosis” signifies Christ’s self-abasement through becoming human, to the point of willingly accepting the agony of the cross and death. Kenosis represented an act of self-abnegation – Jesus renounced his unlimited divine power, becoming embodied in human form and assuming the image of a slave, while yet not ceasing to be god. By this act, he demonstrates the possibility of a new type of transformation, constitutive of his authority: refusal of power for the sake of obtaining what is greater than power – justice, the equality of each with all, surmounting life’s finitude. More recently, similar theological premises have often provided the foundation for a multitude of philosophical conceptions – consider Badiou’s criticism of Agamben in his book Logic of Worlds, where he speaks of “being as weakness,” a weakness that at the same time corresponds to what Badiou calls the “delicate, almost secret persistence of life, that which remains to one who has nothing left.” 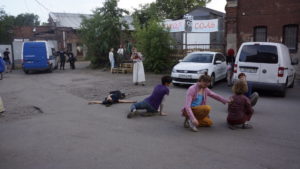 see documentation of the festival here