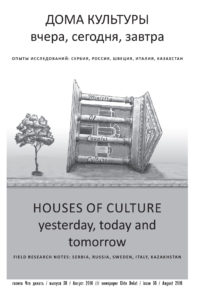 Why are we looking to the experience of the establishment and development of houses of culture? Why is it important for us today?

For us, the Chto Delat collective, this is not an abstract question for scholarly research, but rather speaks to the urgent need to form a fundamentally new context for the development of art. We believe that houses of culture can become places for the formation of a new public beyond the limits of the neoliberal creative class and focal points for the development of political communities of people, ready to produce and defend socialist foundations for culture and art.

For that reason, our historical interest has taken practical forms: instead of studying the houses of culture of the past, we decided to open up a small house of culture and see what we, together with other participants, could learn in practice. That is how the Roza House of Culture appeared in Petersburg, and it has since hosted many initiatives and events which otherwise would probably not have seen the light of day.

It needs to be pointed out that the idea of houses of culture appeared in Italy in the middle of the 19th century, when workers began to gather together to learn how to read in order to pass a literacy test and be allowed to take part in elections. Later, this idea was energetically developed in Soviet houses of culture, and even after the collapse of the USSR it did not disappear, but was transformed and emerged in new incarnations. We can find traces of it in the new centers of the creative industry: Loft Projects, co-working spaces, leisure and recreation centers, and so on.  Today, every shopping mall hopes to house a cinema, a theatre, and children’s play areas. Many art institutions are increasingly integrating the functions of houses of culture within themselves, with their educational programs, libraries, accent on access to marginalized members of the public, etc. All of these contemporary tendencies, obviously, take place in the absence of a political program with any degree of articulation, while in the past, houses of culture were run either by mass socialist movements or by state education policy, as in the Soviet Union and Yugoslavia.

Clearly, if we wish today to reclaim the emancipatory and educational function of the houses of culture, it must be a well-articulated project directed against the hegemony of the commercial-consumer relationship to culture and eager to assert its values and show the possibilities for their actualization.  The political purpose of the new houses of culture is to raise, first and foremost, the issue of re-examining and reformulating the new class structure of society, in which we see the potential for the formation of singularities, i.e., new people, ready at a given historical moment to defend the values of an emancipatory politics and rethink the role of culture and aesthetics in processes of emancipation. This is happening in the Zapatista caracoles in Chiapas, and it is happening in social centers around the world experimenting with principles of autonomy and protocols of openness. Autonomy is always naïve, as any micro-project is naïve in the big world of corporate capital, but only autonomy can launch a challenge and present new forms of production communities that disobey the logic of profit.
Who are these new people? What are they prepared to fight for? What culture forms are they capable of drawing together and organizing? These are precisely the questions we posed when we opened Roza House of Culture, and they are the questions being discussed inside this publication.