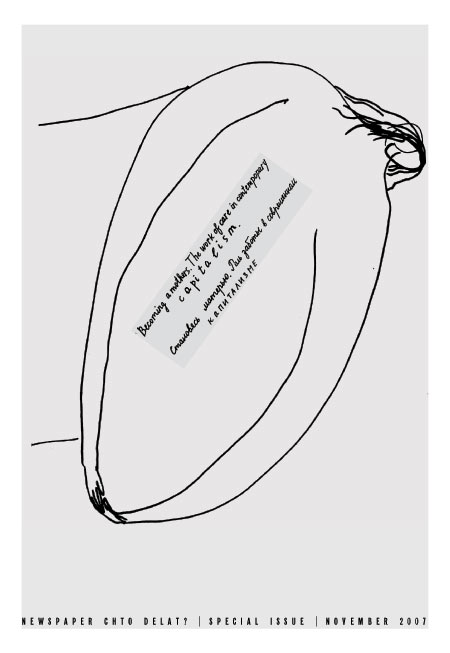 A film by Gluklya and Tsaplya (The Factory of Found Clothes), 2007

The film has the structure of an ancient Greek tragedy. Mothers explain their problems and the chorus which is constructed of the typical social characters is judging her. The film is dedicated to contemporary motherhood.

The Role of Care in Contemporary Capital.

The production of values and knowledge would be unimaginable without the reproduction of life as such. Obviously, a mother’s role goes far beyond basic biological reproduction; in fact, mothers define the production of subjectivity itself. Yet although their labor of love is so central, mothers have constantly been excluded from older conceptions of production, stigmatized as the performers of unpaid dirty work, incapable of sparking any social change whatsoever.

The recent emergence of movements like Global Women’s Strike, the Committee of Soldier’s Mothers in Russia, the Mothers of the Plaza De Mayo, and a number of other organizations show that mothers are consciously taking on their role as an important collective force, further adding to a fundamental reconsideration of the role of motherhood in society, production, and politics.

n o t o f p o l i t i c a l a c t i o n a l o n e
as though boundlessness of human interrelatedness were only the result of the boundless multitude of people involved, which could be escaped by resigning oneself to action within a
limited, graspable framework of circumstances, the smallest act in the most limited circumstances bears the seed of the same boundlessness, because one deed, and sometimes one word,
suffices to change every constellation
i n t h e n a r r o w e r s e n s e o f t h e w o r d
open paragraph never comma had i sensed comma something like comma it comma the body comma the intense drumming comma the physical sensations comma could be identified
comma as pain comma but so connected comma to menstruation comma to sex comma known comma unknown comma labour close paragraph

Up to now, no policy has been developed for researchers who become pregnant during their research period. In reality, there is a need for such policy. – Policy Board Minutes, Jan van Eyck Academie, October 2007

A becoming-mother’s work is never done
In thinking about motherhood in relation to the manifold of contemporary work, we are waylaid at once by diverse paths and traps:  the mother as the prototypical subject of always-on exploitation (with its attendant risks of central subject and subjectivised narrative of capital’s shifts); the production of motherhood as a growth industry and a moral panic (with its attendant risks of hearkening back to an authentic free-range motherhood prior to the strictures of the nanny state).

In his annual address to the nation May 2006, Russian president Vladimir Putin made several new suggestions concerning family and child care policy. Later in this year his proposals were confirmed by the Duma and received legal status. This is the first time that post-socialist gender politics have been so clearly outlined in Russia. While Mikhail Gorbachev in the mid-80s envisioned the possibility of women returning to their traditional roles as a means to lighten their double burden, Putin strongly advocated both wage-work and state support for Russian mothers. What rhetorical and political strategies explain this interesting move? What gender ideology lies behind them?

The Strike and its demands give a unique framework for grassroots women and girls to express our needs whatever our situation, race, nationality, age, income, occupation, dis/ability, sexual preference . . . in towns and cities but also in villages, where most of us live. We hope that whatever demands you highlight or add, you will list them ALL. The demands unite everyone taking part in the
Strike, and to each local action they bring international power. The anti-globalization, anti-war movement, to which women are contributing so much hard work and energy, is just beginning to recognize that Invest in Caring not Killing is a perspective for winning.

During the 20th century Sweden went from being an almost all-blonde, agricultural kind of society to a multicultural society based
on duty and education. A reduced number of newborn babies, less people living in confined quarters and increased economical
resources for the households were some of the results. Accordingly, the Swedish people have more space and more money but reproduce themselves less than before. Also, fewer babies are born today in families situated in Stockholm compared to the rest of the country (1.79 to 1.83 per family).

During the 1930’s a motherhood insurance was introduced to Swedish women. In 2007 the parental benefits have been extended
and guarantee both mothers and fathers the possibility to combine work with having children. For example can parental allowance
be paid out for 480 days and depends on the parents earlier income. The child allowance, introduced in 1947, is paid every month until the quarter of the child’s 16th birthday. Today it is SEK 1050 and further child allowance supplement can be paid out if you have more than one child. Regarding gender equality, one can note that 80% of the parental leave-days are used by the mother and only 36% of the parental allowance when a child gets sick is used by the father.

Written for magazine Diagonal in February, 2005

In the present context, the logic of security is the principal form of taking charge of bodies and organizing them around fear, contention, control, and management of unease. This article is a first approach and analysis of the concept of the body managed through securitarian logic, in order to see forms of regulation that are being used and to feed practices that take root in the politically radical character of care. The logic of care that we propose recognizes interdependence, wagers upon cooperation, and articulates itself as a social ecology.

The modern conception of the body is founded on the division and hierarchization of mind/body and on the construction of the body as an individual self-regulating machine.[1] This schema, though still in force, is not enough for us in order to understand how our bodies function nowadays, many of them urban bodies, rapid, and rather stressed. Today, the slogan ‘biology is not destiny’ is in effect; the body has become a place of construction where one canintervene, to make the body and negotiate with materiality itself.

Elena Gapova /// Of Care and Competition

Women do reproductive work – giving birth, breastfeeding and nurturing – without which human continuity is not possible. But this very reproductive work that they do as mothers, that makes them vulnerable, because it confines them to the lack of autonomy.

Historically, the idea of autonomy was connected with the notion of citizenship. In Antiquity, Aristotle believed that citizenship was based in friendship and denied the capability to grasp its notion to women and slaves, i.e. to those who lacked either resources or status positions to be seen as autonomous: they always belonged to someone. When the idea of citizenship was coined in its modern complexity in eighteenth-century France, women were denied full inclusion on the basis of their special traits. Rousseau and other Enlightenment thinkers argued that women did not possess the qualities of autonomous subjects necessary for being citizens: they were not rational enough, their moral judgment was too partial, they were not capable of self-representation or grasping the concept of objectivity. The lack of these qualities was viewed as womens nature; now we think of this denial of autonomy as derived from womens lack of resources (or lack of access to resources). And access to citizenship was allegedly based on identity features of individuals, yet their identity depended on the recognition by others, on the external confirmation of autonomous individuality and independence through social interaction. The distinctions between those who possessed the necessary autonomy and those who did not have the autonomous individuality were eventually worked out to be of two types: between those who were economically and socially dependent and independent, and between women and men. Women and the poor are often (especially in the welfare state) seen in the same category. Like the poor, they do not have the resources that are necessary to exercise agency and be recognized by others as autonomous subjects, and they do not have them because they are busy doing something, which is not ascribed an economical value. They do reproductive work: birthing, nurturing and caring.