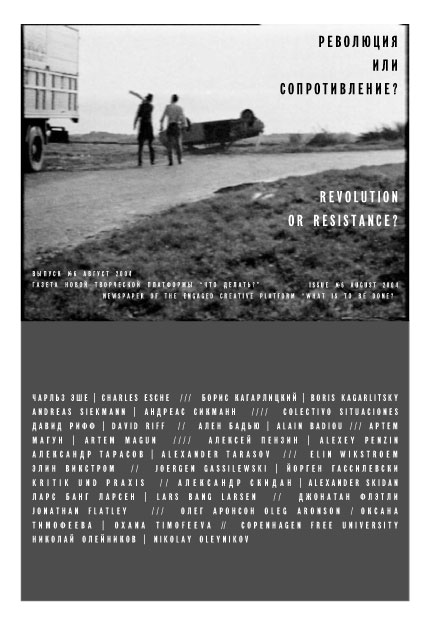 You say you want a revolution
Well you know

we all want to change the world

You’ve been resisting for all of your life. But often, you are beset by doubt: maybe your resistance was nothing but a form of collaboration with the Powers that Be? What have you been trying to achieve with all of your resistance? Will it lead to revolution, or just yet another set of lukewarm reforms, to getting stuck in the spiderweb of tacticly accepted compromises? Do you want a revolution? Yes or no? This question is as crude as blackmail from which it is impossible to hide. But mourn as you may. The revolution is coming, as long as we are still capable of thinking and feeling it.

In answering the question of “Reform or Revolution”, Rosa Luxemburg saw “the idea of transforming the sea of capitalist bitterness into a sweet socialist ocean by adding social-reformist lemonade bottle-by-bottle” as something both tasteless and fantastic. With her critique of Bernstein and the reformist fraction of Social Democracy in 1899/1900, Rosa Luxemburg opened a debate that eventually produced two political camps, each of which claimed the sole right of leading the working class. By today, the question “Reform or Revolution” almost sounds impious; both historical titans have shrunken and become touching old men.

Since the 1960s, people have always asked the question whether Godard was a revolutionary pornographer or a pornographer of revolution. Just another Beatle (cf. Spectacular Society, chD 1)? A “Maoist liar”? (Debord). Or was Godard really the one of the greatest revolutionaries of the cinema? Don’t Godard’s early aesthetics provide ways of opening new understandings of what politics actually are? Was he able to codify and transport these new meanings, to encapsulate them within a cinematic anti-narrative made to survive the Thermidore?

The latest revolutionary moment was 1968, a mutation of the Western world that rode on the combination of an economic boom and youthful resistance to authority. Patriarchal society’s reign over desire and society was overturned, values set adrift and art and politics fused in a convulsive synergy. Things were up in the air, and the different cultural spheres were zapped open and connected by a surplus that allowed for their lateral interaction.

This was the free play of revolutionary forces, but it also represented the fractured surface between old and new forms of behaviour. The decade’s explosion was symptomatic of a civilisation wondering what to do with its affluence, and its new technologies of cybernetics, automation and leisure. The commercial world found that the overlaps between cultural spheres were bankable, their synergy resonant with lifestyle options. The lore of 1968 proved that it was possible to get high, make money and express yourself – all at the same time! As an upheaval affecting most aspects of modern life, the psychedelic revolution was necessarily full of these paradoxes and unclean relations. It liberated ideas and behaviour, but it also paved the way for visions as an industry. In other words, social control developed into a more refined, gaseous presence.

First, it seems to make sense to say something about what I take the terms “resistance” and “revolution” to mean. Of course, as terms or concepts, both have been hopelessly appropriated by advertising, especially the term revolution. In the U.S. at least, every purchase signals a revolution. Think of the transformed life you could have with a thinner waist or faster car or cuter ass or whiter smile or larger television or high speed internet access or a washing machine, etc. So this has to be taken into account in any analysis.

Also, it should be noted, perhaps it is taken for granted, that what follows is neither argument nor scholarship. It is more of a what I happen to be thinking about the current topic at the present moment. I make no claims for its originality or rigor.

Oleg Aronson // The Rebellion of Nonviolence

Revolution is impossible. In the contemporary epoch of new media technologies, revolution in its traditional sense has become impossible. Cinema and television mobilize massive populations far more effectively than any “revolutionary situation”. The notion of the “revolutionary situation” comes from the rhetoric of a party that felt called upon to mobilize the masses as the fictitious subject of the historical process. The question of who plays the role of the revolution’s main protagonist in the end – the masses or the party – can only lead us astray. It introduces dialectics to something that leaves little room for their to-and-fro.

One of the most tragic episodes in the history of resistance took place long before our time. It was described by Sophocles. The royal couple, condemned by oracular prophecy: the son will kill his father and marry his mother. To evade the will of the gods, they put the infant to death. But he survived. In his youth, he too visited the oracle, which revealed the will of the gods as the true source of his identity. Of course, he had to leave his foster parents, which he thought to be his own up until the oracle’s revelation. Everyone knows what happened next.

Until, the scene is vivid: Oepidus stands at the crossroads, trying desperately to choose the path that leads away. Even though he is under fate’s control completely, he still wants to hoodwink providence somehow, to resist, but his actions only help to seal his brutal fate, which has very little to do with anything like justice or freedom.

Resistance or revolution : At first glance, this general pair of terms produces a stigma. It implies confessional positioning. Such “big” words often lead to the kind of non-commital statements that appear on the opinion market of the feuilleton. This is something I don’t want to take part in.

Resistance is the politics of baby steps: being on location concretely, getting up again and again, forming continuities and competences, clamping down your teeth with no intention of letting go  yet tending to lose yourself in details, becoming reformist, making yourself comfortable in your little niche. In contrast, revolution is the grand gesture, the distant goal, the actual, whose details you can easily ignore. There is, however, also a great danger of losing the ground beneath your feet and finding yourself face down on the carpet of the salon.

Colectivo Situaciones // Between Crisis and Counterpower

David Riff // Throw them out!

Dislocated somewhere between 9/11 and Iraq , the Argentine insurrection of 2001-2002 seems to lie in the already-distant history, even though its events took place in the very recent past. During the mid-1990s, Argentina was lauded as an economic miracle. In order to promote the privatization of the Argentine economy following years of military dictatorship and a stagnant, nationalized economy, the International Monetary Fund (IMF) and other multilateral organizations had been supporting the dollarization of the peso by flooding Argentina with huge loans. But by December 2001, the IMF’s stabilization-recipe had soured. Currency values caved in completely. Unemployment and wage-withholding grew rampant. Fearing a run on the banks, the government froze accounts. The cash-machines ran out of money. The stores refused to sell their goods. The president resigned. Within a month, Argentina defaulted on 132 billion dollars of foreign debt. Millions took to the streets throughout the country shouting “Que se vayan todos!” (“throw the bums out!”), banging pots (= caserolas ) in protest. The power vacuum left by both governmental crisis and investor withdrawal created a need for radical-democratic grassroots “self help”: neighbours formed constituent assemblies, barter points, and public eateries; factory-workers took to forms of self-organized production, once the owners had been driven away by the default. The heterogeneity of a insurrective multitude, bound together not only by negative (destructive, violent) criticism, but also by the existential need to build something new as an alternative to the system’s hopelessness.

1. Art is not the sublime descent of the infinite into the finite abjection of the body and sexuality. On the contrary, it is the production of an infinite subjective series, through the finite means of a material subtraction.

2. Art cannot merely be the expression of a particularity (be it ethnic or personal). Art is the impersonal production of a truth that is addressed to everyone.

We cannot, on this newspaper’s pages, offer you a complete, coherent introduction into the work of Alain Badiou, who is one of the most significant and original thinkers of our time. We can only clarify a few things that the “proletarian aristocrat” Badiou did not find necessary to explain.

In his first thesis, Badiou is obviously referring to the psychoanalytical interpretation of art. He agrees with Lacan that art’s main gesture is subtraction, abjection, and ellipsis. But he also opposes Lacan’s Kantian ontologism of the Infinite and Unreachable “Real” and its constructive pathos: subtraction affords the possibility for the appearance of the subject, the subject of event, truth and political action.

“Of course, there is a huge difference between authentic social struggle in the name of the exploited minorities…and…sowing the kind of safe, harmless, inoffensive resistance that flourishes among “radical” university professors”. (S. Zizek, “Repeating Lenin”)

Even the media-adept Zizek sees “resistance” as something that provides a hidden legitimation of the status quo, poignantly uncovering its motivation (the Lacanian model of hysterical behaviour): the intellectual-resistance-fighter constantly provokes the “System” (the Other, the Master) with his texts and public appearances, but the name of the game is that nothing should ever change, that everything should be understood in the framework of “psychology” (as the confirmation of non-conformist identity).

AP: In recent times, the Left has been talking about “resistance”. Ranging from the names of activist groups to the texts of the Leftist press, “resistance” is everywhere. Is this simply a moral position? That is, under the new rigid conditions of neo-liberalism, just when it seemed that all was lost, we will continue to stand up for what we believe is right. If we articulate our resistance in the sphere of culture or in everyday life, it is because we don’t have the possibility for expressing our protest in politics, not to mention for changing the situation in any cardinal way through our actions. To me, this seems like a hidden trap. First of all, we derive a colossal amount of narcissist pleasure for our (supposed) non-conformism; second of all, we receive rather tangible bonuses, finding our selves in the system one way or another…