the collective Chto Delat in partnership with Vierte Welt, Berlin 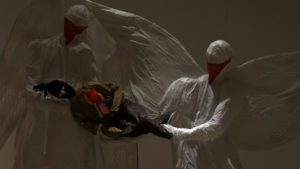 The course is based on the on-going experiment in performative pedagogy of collective Chto Delat whose members are full time present and moderating all the school sessions.

TOPIC OF THE SUMMER SCHOOL:

“Go and stop the progress!” – starting with this legendary quote attributed to Kazimir Malevitch we want to test different ideas and practices which question the notion of progress.

Today we face two different approaches to the potentiality of liberation – one stems from rather classical Marxist link between emancipation and rather linear technical progress – this positive line is actively promoted in the work of “left accelerationists” or in the speculations on the “communism of the capital”. There is a lot of useful critique in this direction, but we have a growing feeling that there is not much time left until the capital digs its own grave. And it seems like this grave might turn out to be as much a gloomy dystopia as a flowerbed of bright new life.

We can observe another tendency, on one hand, of questioning the whole idea of western modernist progress, and on the other, of attending to so-called indigenous/vernacular knowledge and cosmogony. Very often these ideas are reduced to uncritical and kitch promotion of new age and escapism, and even traditionalism. But these ideas could also be linked to the most radical European way of negative thinking, where progress is considered as barbaric exploitation and destruction of resources and human lives, and it is based on genocide and ecocide.

Therefore, today, when we feel intensifying attacks from conservative and progressivist forces of all kinds the question how we would imagine and realise the values of emancipation and non-alienated ways of life is as pressing as ever.

In the school we will additionally focus on the ideas of international Zapatista movement, which stands as a viable example of a certain historical composition between the anti-capitalist struggle and the indigenous/vernacular way of life and knowledge. Based on the on-going research realized by the collective Chto Delat in Chiapas in 2016-2017, it will test the new possibilities for “rootedness” that could be used to overcome the conservative logic.

This confrontation of two position will be rehearsed and staged in a form of Learning Play – developing the Bertolt Brecht tradition of formulating and taking positions in front of engaged audiences.

Intensive performance training in the morning, followed by discussions, lectures and collective work on the play. Preparing a public performance, to be held on the last day of the event. The collective visit to Berlin Biennale is also planned during the School.

WHAT ONE CAN LEARN HERE:

– The suggested minimal donation (the participation fee) for the Summer school is 500 Euro.

– A jury will award 5 participants with stipends – free of the participation fee.

– The fee covers tuition and study materials during the school.
– Coffee brakes included.

The school is fully self-financed, by donations from the participants and with the support of Chto Delat Mutual Aid Fund. The donations will be used to cover the costs (travel and accommodation) of collective Chto Delat to Berlin, a donation to the Zapatista community (10%), a donation to the Vierte Welt and the fees for the faculty and basic administration work.

It should be payed by bank transfer to the Chto Delat e.V. (not for profit organization registered in Germany, tax deductible)

Arrangements for accommodation, transportation, visa (if needed) and other expenses is arranged by the applicants themselves.

WHAT WE EXPECT FROM THE PARTICIPANTS:

– We welcome applications from artists, performers, activists, cultural workers, philosophers and generally open-minded people who share the urgencies raised in the concept of the school.

– Applicants should be curious and open to experience of different body practices and be ready for the collective form of working and learning.

– Applicants from all countries and age are eligible to apply.

– All applicants should apply with short motivation statement and short informal CV.

– The number of participants is limited to 25.

– Deadline for sending the application for stipend: till 03 June 2018

– The selection results for recipients of a scholarship: 10 June 2018

– Deadline for general applications – till 1st of July

Founded in 2003 in St. Petersburg, Chto Delat (What is to be done?) is a collective that counts Russian artists, critics, philosophers, writers and choreographer among its members. The collective came about with the intention of merging political theory, art and activism. Working across a range of media—from video and theater plays, to radio programs and murals—their activities include art projects, seminars and public campaigns.

In 2013, Chto Delat initiated an educational platform—School of Engaged Art and also runs a Rosa’s House of Culture in Petersburg. From its inception, the collective has been publishing an English-Russian newspaper focused on the politicisation of cultural production in Russia, in dialogue with the international context. The works of the collective are characterized by the use of alienating effects, surreal scenery, typicality, but most of all, case based analysis of concrete social and political struggles.
see more at www.chtodelat.org

Vierte Welt Collaborations was founded in 2010, initiated by the actor’s ensemble Lubricat in Central Kreuzberg. The Vierte Welt is a space where artists, specialists, activists and audiences come together on an equal footing for interchange and communication.  The Vierte Welt developed an open space of possibilities in which we assert a durable and continuous platform for creative work – in contrast to the market’s short-term, coerced exploitation.  Parting from the focus on singular aesthetic events and from scene confinement, we are working on changing how artistic production and presentation are practiced. Where we attempt to re-think the aesthetic and art-political position.

The program of Summer School is also a part of an ongoing conversation between Chto Delat / School of Engaged Art and Free Home University on the role of art, social transformation and radical pedagogy. (see here http://artseverywhere.ca/function/education/free-home-university/