Home » Newspapers » #1 What is to be done? » Artiom Magun // The Refoundation of Petersburg

Artiom Magun // The Refoundation of Petersburg 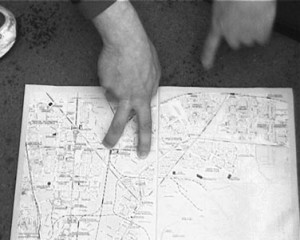 At 12.30 PM, the participants entered the platform of the Baltic railway station with the large signs of the following content: “I am leaving Petersburg”, “Petersburg from scratch!”, “Petersburg roofless”, and “Petersburg 003”. They marched in front of a large crowd that followed them, running. In front of the door of the suburban train, the manifesters stood, exposing the signs and distributing the leaflets that invited the citizens to think of the city cultural policy.

Inside of the train, going from the Baltic station to the “Leninsky Prospect” platform, the activists addressed the citizens with the inflammatory speeches about the future of Saint-Petersburg. It was, perhaps, the first time when these passengers were interpolated not as consumers but as citizens. The citizens reacted in various ways – some supported the participants, avidly reading the leaflets, others suggested to arrest them and called the police.

On leaving the train, the manifesters went searching a place for the re-foundation of the city. Waving the signs and distributing leaflets, the group marched the Leninsky prospect and then turned on the Novatorov boulevard in the direction of the Turukhtan islands. 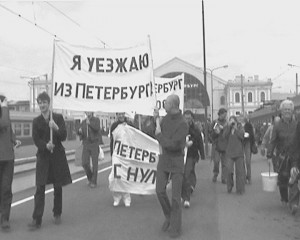 Then, having consulted a map, the participants approached a large bridge on the Marine Infantry street, which stood as a protected gate from the city to the sea. Here, they were stopped by the police officers who politely criticized the action participants, stressing the strategic importance of the bridge and asking to wait with them before they clarify the situation. Soon, the situation was clarified. About ten police cars came, and the policemen armed with automatic weapons spread out of them. The chief of the district police, dressed in fashionable civil clothes, explained that the action was an illegal demonstration (literally, a “march”), and invited them for a “discussion” at the police station. The participants mounted the police cars and were delivered to the police station # 64 where they spent the next 4 hours. The discussion ended with the imposition of significant money penalties, and then everyone was set free.

After having left the police station, the manifesters realized that the arrival there was a sign of destiny that dictated the place to found a new city center. In front of the police station, at Zhukova prospect, 33, they solemnly put a stone into the ground, a stone that will stay there until the new center will rise around it.

We believe that our action will become a crystallizing point for a broad union of the artictic, literary, and scholarly avant-guarde of Saint-Petersburg, who feel the free space around them.