what is that?
It is a public manifestation with rituals, initiated by the yearly event Kortrijk Conge and conceptualized by Chto Delat collective together with people and local communities of Kortrijk. The event takes place on 11th of July 2015, The Day of the Flemish Community of Belgium, celebrated every year in remembrance of the Battle of Golden Spurs or Guldensporenslag that took place in Kortrijk in 1302. All our futures opposes the nationalistic connotations of this holiday and pleads for an open society based on egalitarian solidarity that is willing to move towards an common future. All our futures will take the form of a street parade and will be launching the Time Capsule.
why?
We live in the moment when the collapse of visions of a better world is omnipresent. And our usual imaginations about future tells more about catastrophes, ecological disasters, growth of inequality, and direct threat of barbarism. In this particular moment we need to reclaim a certain dialectical and utopian platform which gives us some hope and unleashes our ability to think and imagine things which do not exist – like true equality, solidarity, inhabiting other planets, the existence of harmonious mutants, resurrection of the dead, pure healthy environment for everyone and many other things that humanity always dreamed of.
how?

We are organizing a theatrical street parade which proceeds through the city, arranged around 6 movable platforms – 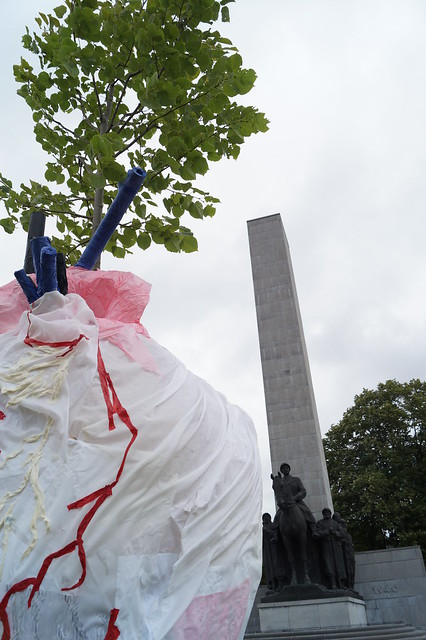 1) The Time Capsule platform which carries the Tree, the Soil and the Capsule in a form of giant heart which will be filled with all possible wishes collected from the people of the city. The tree will be planted inside the heart during a special ritual.

2) The minivan Red Dawn. Wandering futuristic lab will join the procession after having functioned as a mobile workshop throughout the city. It symbolizes the idea that future very much depends on colonizing outer space and de-colonizing earth.

3) The Danko platform is based on the fusion of two stories – the story of one symbol of Soviet time – the famous monument ‘The Peasant and the Worker” realized by Varvara Mukhina after the ancient example of the sculpture “Harmodius and Aristogeiton”, dedicated to the two men lovers whose act of daring in 514 BC opened the way for Athenian democracy. It also refers to the famous Russian visionary fairy-tale “The Flaming heart of Danko” by Maxim Gorky. It’s a fascinating story about one man who sacrifices his life by wresting his heart, and the heart lamped the people the way out of darkness.

4) The Beast – a collective sound platform – is a machine on wheels which allow people to create a variety of sounds that are unimaginable on normal music instruments, nor by human voices.

5) The Communist Arch is a palanquin in the form of Green House, modeling the life in the paradise.

6) The Black Cube – is another palanquin, referring to Malevitch’ painting “Black Square” and also to the mysterious Ka-aba building in Mecca. In our theatrical narration it stays for the loss and attainment of the future.

The event will end up in an Iftar, (the moslim’s moment to start eating during Ramadan) where all communities are invited to share food, thoughts and visions on a common future.

So we say:
OXI/no to the present
YES to the future