Home » Projects » Commisioned works » Monument to the century of Revolutions #2017

Monument to the century of Revolutions #2017

Monument to the Century of Revolutions

In 1917 Lenin arrived to Russia in sealed railroad car to prepare and lead Socialist revolution in Russia. This car can be considered as a kind of transport container at that moment used for literal shipment of revolution’s brain and will. Today containers – technical innovation which once revolutionized the transportation of goods and made globalization possible – become a symbolic module for the artistic presentation of different historical events which occurs around globe after the surprising and shocking success of Russian revolution.

But what can be considered as revolution? Those who looks at Wikipedia at the section of 20th-century revolutions will be shocked in front of long alphabetical list of different events around globe which has happened inside less than 100 years.

Revolution is a process of emancipation and something it affects the established order. Not many emancipatory struggles culminated in their own revolution but they always created so called revolutionary situations with unpredictable outcomes. Revolutionary situation is something where progressive and reactionary forces in society can join their historical work and always challenging the status quo and the power.

What is the meaning of these events for us today? What did 1917 open and what did it block? What would it mean to break the continuity with capitalism in its current overwhelming forms of its ongoing crisis, conservative assault on society, debt and austerities? Do ‘revolutions’ continue as a carrier for emancipatory egalitarian energies or has that possibility been fully foreclosed and the professional revolutionaries is long forgotten occupation which is incompatible with democracy?

In this project we have no possibility to speak comprehensively on the political, social, and intellectual legacy of these different events. But we try to create a temporary night monument dedicated to all histories which we deliberately choose to present through the studies of its own visual language and different artistic interpretations of it.
Monuments and memorials often are the celebration and commemoration of the dead – usually those who sacrifice their life in fighting for the change. The revolution can be considered as the sublime event because nothing can be more sublime as people fighting for liberation – and a sublime has always its own representational limits – and we try to unite sorrow and exultation in a short narrative for 12 hours.

All entrances to the container in our installation are closed – and through some gaps public can only see a strong blinding light which reminds us that today we can hardly imagine what real revolution is and this light should be kind of a reminder not to forget and not to forgive.

Photo-documentation of the project in Toronto: 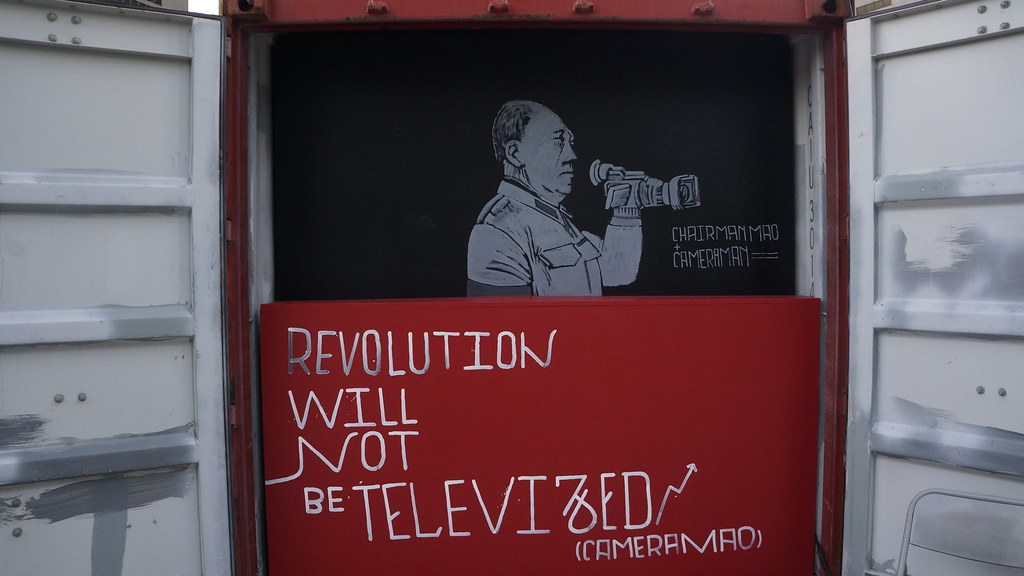 Our temporary monument at night integrates a group of containers that present different local histories and current struggles in Toronto realized by local artist activist groups. We think it is critical to contextualize their work in a long histories of international struggle for emancipation, dignified forms of life and genuine democracy.

We do not mind that many of them reject the rhetoric of historical revolutions but their efforts and commitment because, nevertheless, their work is build on a foundation of revolutionary history. “In doing so this living, breathing monument brings into the world a social space that informs and complicates the narrative and history of global justice”. (Nato Thompson)

you can watch this program at this link