Realized as commission to Fast Forward Festival 5, curated by by Katia Arfara
http://www.sgt.gr/eng/SPG2138/

***
Pedion Areos is a very typical and at the same time a very unique park.
During the festival we invite the residents and the public to rethink the park through a series of artistic interventions collectively initiating chances for nascent communities to reimagine the use of the space.
This considers the alternatives to the sheer economization of the leisure time and to the conservative wish to preserve old, nostalgic and homogeneous social bonds. Equipped with a temporary set of entertaining and educational activities the project challenges national narratives, rigid stereotypes and identities and thus creates temporary possibilities to reinvent the role of recreation areas.

With its monuments Pedion Areos was once conceived as a place of paradise and national pride. With a time pass through many failed reconstructions and redefinition of its function for the local community and for the Athens took place. The park is a peculiar mirror in which the whole society is reflected. The choice of the park as a festival location is a demand to focus on the history of the place and its ongoing transformation allowing to critically question its current role as a place seemingly occupied by the “dangerous” forces – such as homeless people, drug addicts, criminals, dog owners, sex-workers, migrant’s, marginalized and displaced communities. Unfolding our project from within of the park opens up possibilities to channel a multiplicity of different stories that reflect the current situation of local and global social life and consider its alternatives. 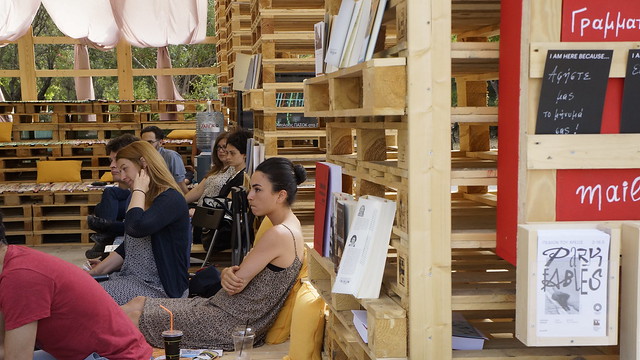 This traditional medium of storytelling is a short case study with a moral conclusion we use as powerful estrangement device for touching many actual issues of current politics. The fables developed on site, will be introduced by the main protagonist a homeless dog “Mavrula” which lives in the park inviting the audience to think about the situation for themselves and derive different individual and collective reflections of a the realities and possible transformation of the park.

Why Theater?
The area of Pedion Areos was very famous for its theatrical shows which attracted a lot of public. This legacy is reclaimed through our play which referencing this significant history. We have deliberately choose the combination of devices of promenade theater and the circus alike puppet show which brings to the public the set of contemporary fables and invite them into participatory creation of moral conclusion.
Three guided tours through the park navigate the public through different type of narratives: 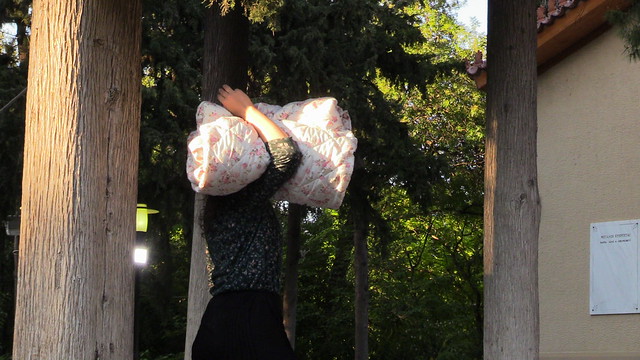 Why Radio?
The project opens doors to the Radio Pedio – a narrowcast radio studio and a sonic installation located in and around the ephemeral pavilion in Pedion Areos. Drawing on the distinctive history of Greek radio the peculiar starting point of the Radio Pedio is the Song of the Shepherd, introduced with the first Radio Broadcast in Greece and the pirate radio station the Voice of Truth. Both allow considering a variety of artistic tools for critical and collective enquiry unfolding a diversity of relationships that constitute public space. Questioning the call of the shepherd and the role of the flock, the station is interactive and constructs an ambiguous space of listening as a network of transmissions and receptions. Considering Greek meaning of the word truth, as a notion of not-forgetting, the station responds to the gradual disappearance of infrastructures of memory through establishing of networks in which the listener is invited to discover and to manifests the heard. The radio is a learning site developed in resonance with a complexity of sound and voice in the park and providing amplification for a series of discussions and workshops, presentations and screening, library and archive materials, unexpected encounters and temporary exhibition in the park.
Radio Pedio in Pedion Areos, historical field of military manoeuvres, is a play of words encompassing a radio station in the field and the expansion of the field of radio practice literally and metaphorically, while considering radio as a strategic tool of art and politics

Documentation of the performance

On the stage build at the 1st of May Square 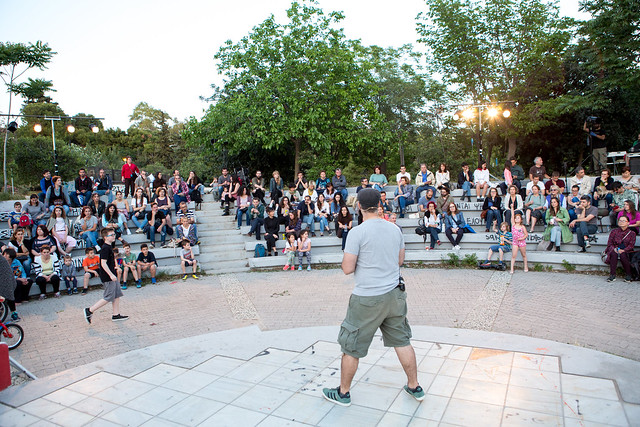