“Where do you live? Not in Russia? Why are you asking me these questions?”

Any government and any state is primarily an apparatus of violence (of one class over another), so at least says a famous definition. And society itself? It too  is saturated with violence: moral condemnation and exclusion, affirmation of norms, control over corporeality, religious taboo etc. The role of violence varies from society to society, and here, Russia takes a place of its own, a space steeped in various forms of aggression and checkered with spaces of exclusion, where the violence of repressive, punitive shocks is cultivated by both power and the population at large and has a nearly ritual character. Russia sports a highly profitable market of “violent actions,” which acts as an important if not key factor in the local economy: the courts and the police, the prisons and the corporations, migrant labor and cultural production, all of these spheres are based on the consequences of violent raids, each of which comes with a price tag of its own.

First presenation of the installation Russian Woods at the solo show “Perestroika: XX years after” 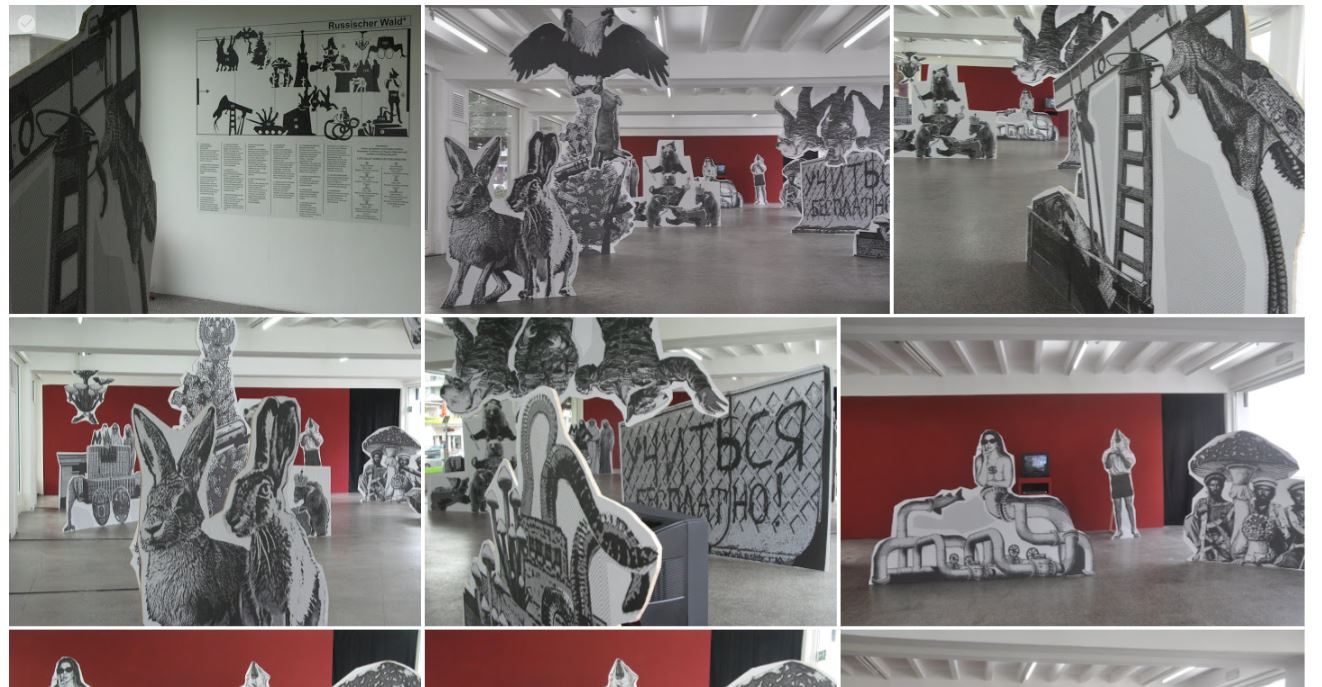 When working abroad we often ask ourselves what we represent in this context and why we have been invited. There is the hidden pressure to talk about some exotic, artistic/activist experience drawn from our own country, where politics somehow survives against coercion more brutal than that in the West. As we have often written, there is a certain problem with this outsourcing of politics. As Elena Filipovic correctly notes in a recent article about our group, we have to represent “a certain history while overcoming common preconceptions in order to act as international translators.” But what are we actually translating/representing?

The point of departure for our solo show at Kölnischer Kunstverein is our first songspiel, *Perestroika Songspiel: Victory over the Coup* (2008), which marks the end of one period in Russian history. For most of us, it was an event that was crucial in shaping our political subjectivity: we date the history of the new Russian state to this moment. So we asked ourselves what remains in our memories after all the transformations of the past two decades, and we ran head-on into a set of disturbing, weird, grotesque images. As usual, our narration is based on the media and the popular imagination: we merely decided to push them to the limit and reveal their inner irrational and vital functions, and to try and confront them with our body of documentary film works. That’s how the installation *The Russian Woods* began to grow.

This time we have decided to try and find a way to represent the Russian unconscious and to examine how far the language of art is able to take a representation of reality rooted in its historical dynamism, brutality, and lack of transparency. What can we do with this reality’s horrible and largely indescribable violence that renders all varieties of artistic virtuosity powerless? It is not our intention to sensationalize or demonize Russia: we are convinced that the Russian situation is very much the result of the global division of labor and geopolitical confrontations triggered by capitalism, and that its political system is no less irrational (or, for that matter, rational) than the “Russian soul.” So we must speak about Russia in the context of a new global order where sheer exploitation of the periphery goes hand in hand with the accumulation of enormous wealth by the minority who control all resources (human and natural), the self-elected few who deprive the majority of the fruits of their labor, forcing them to live in poverty and misery like modern-day slaves.

It is important not just to demonstrate our negative attitude to Russia’s current regime, but also to offer a visual explanation for why we continue to oppose our country’s current development and the mode of governance that has brought it to a dead end.

The description of the figures

The Hare is a popular character in the Russian Woods. Usually in danger of being eaten by the other animals, the Hare is cowardly and embittered, and always on the lookout.

1/2. Two-Headed ChickenRapacious and merciless to its foes, the Chicken appears on the official seal of the Russian Woods.

The fire-breathing Dragon guards Oil, the main treasure of the Russian Woods. It has all the qualities of a regular dragon. Greed and ferocity are its dominant traits.

The Mermaid evokes the wraith of unquenched desire. In the Russian Woods, she serves the Dragon. She prefers the company of Bears, and despises Hares.

The Special Purpose Police serve the Dragon, the Chicken – and themselves. They are corrupt and criminal. They show up in the most unexpected places, often intoxicated. For the most part, they are engaged in individual entrepreneurship.

10/1. Black Widows outside a Metro Station

Metro Stations are entrances into caves in the Russian Woods. The Black Widows (the insidious spawn of the Toadstool) blow themselves up in these caves, taking the lives of other inhabitants of the Russian Woods.

The favorite nesting spot of Spy Bats in the Russian Woods.

Despite the fact that mushrooms have sprouted on it, the Mausoleum remains the most important historical monument in the Russian Woods.

Government house in the Russian Woods. After being shelled by tanks in 1993, it is always ablaze. The chicken legs enable it to turn in any direction on the orders of its Owner. Possession of Fabergé eggs is a sign of love for the Powers That Be. They grow on the inhabitants of the White House on Chicken Legs, who thus display their proper national orientation.

Wolf-Girls are the contradictory elements of history. They laugh, dance and obey no one. Their habitat extends beyond the Russian Woods.

Русский Лес /// The Russian woods from chto delat on Vimeo.

This film is a production of the collective Chto Delat

This film was produced with support from the Chto Delat’ Fund.