Between tragedy and farce #2011

Documentation of the project “What is to be done? Between tragedy and farce” at SMART project space Amsterdam (2011)

Posted in Projects, Between tragedy and farce #2011 | 0 comments

press release of the show

Between tragedy and farce

– the composition of the show and its background

The question “What is to be done?” is an universal one. Historically it marks the position of the left in connecting tactics and strategy of their politics. But the answers to this question are always locally and historically conditioned.

In our new exhibition at Smart Project Space we want to map the complexity of our local, Russian political and social situation and to find a way of representating it in the form of a spatial installation.

We have set this task upon ourselves for the first time. Before we have reflected these issues mostly at the space of our newspapers and films. Now we have decided to work with the enormous and chaotic statistic base of data as a means of representing  Russian reality.

As a small collective from a rather unknown country building a presence abroad we often ask ourselves what do we represent here? And why have we been  invited? There is a strong pressure to speak of some “exotic,” “activist” experiences in our local situation, where politics somehow survives under a pressure even more massive than what it faces in the so-called “West.” As we have often written, we have a problem with this outsourcing of politics. So we always have to act as correctly noticed Elena Filipovic in her article “the double role (of Chto Delat): representing a certain history while overcoming common preconceptions in order to act as international translators.”

But what are we actually translating/representing? Or as we have reformulated the question in the title of our show– What is to be done between tragedy and farce?

What can we do with all this massive and unreliable data – like oil production figures, records of homeless people, tax revenues and levels of wages, numbers of murders and birth rate; the growth of inequality and the parallel growth of the military-industrial complex; the index of xenophobia and depopulation  etc.

How to connect all this data and construct a picture for a viewer who has no idea what it actually means to be here?

We need this picture, and not for some academic reason; there is serious scholarship (though it probably isn’t enough). Nor is it our intention to scare a Western audience; the media do that enough already. Instead, we need this picture of Russian reality to build a context for our work and to examine how far the language of art is able to carry on the work of representation of reality in its historical dynamism, brutality,  and lack of transparency.   What can we do with this reality’s horrible and largely indescribable violence  in the face of which any kind of artistic virtuousity remains powerless.

We do not want to ssentialize or demonize Russia – we are  sure that the Russian situation is very much the result of global division of labour and geopolitical confrontations triggered by capitalism and its political system of power. So we need to speak about Russia in a new global order where sheer exploitation of the periphery goes hand in hand with accumulation of enormous wealth for the few who control the redistribution of raw resources internationally.

For us it is important not just to demonstrate our negative relations to Russia’s current regime but to offer a visual explanation for why we continue to oppose the current development of the country and the mode of governance that has run it into a dead end.

In the first three rooms of the SMART project space, the public encounters the graphic representation of different information on the situation in Russia and how it has changed over the last 10 years, a crucial decade in the life of the young Russian nation state. The first hall  concentrates on the representation of the different factors of growth in all possible spheres of economy, politics and everyday life. These developments are grows is the material base for building a pro-Putin majority in Russia and we should carefully study these phenomena. The second room represents the different forms of conflicts based on real cases taken from recent social and political life. The third space focuses on the human dimension of the transformation, trying to raise the issue of  possible scenarios for the future

This installation takes the form of wall murals, realized by artist Nikolay Oleynikov with the help of sociologist Oleg Zhuravlev and Dmitry Vilensky. It directly confronts the other elements of the show –  key video films realized by Chto Delat in the period between 2003 and 2009 and as well as architectural elements – huge wooden panels with fragmented prints out from the pages of our newspaper from different years.

A reading room integrated into the exhibition shows all our publications and as well as a selected list of books that members of our collective recommend as insightful readings.

The main hall is dedicated to the Songspiel trilogy which for the first time represented together with some objects that served as props for our films. Each Songspiel is located in a specially constructed video box, giving the  viewer a chance to gain overview of these three key pieces.

The last space in the show is constructed as a workshop space conceived and realized by Gluklya (Natalia Pershina) which is based on the results of her workshops of The Shop of Utopian clothes run with different social groups in St. Petersburg (such as young females, queer, pensioners). The collection of clothes which is on view at the show also deal with the issue of representation of different social group and realities through the participatory collective production which results in the clothes/objects which has its own history.

It is primary concerned of the possibilities of participatory workshops that kind of developing the tradition of workers cultural houses educational activity and refer also to the famous female sewing workshops depicted by Nikolay Tchernishevsky at his novel “What is to be done?”. Through this collective artistic work they involved into the process of self-empowerment and gain an important experiences of relating to the society. During the show Natalia is planning to run such a workshop with members of local migrant communities

Photo-documentation of the exhibition

Announcement of the Learning Play

“Where has Communism gone?”

Presented by Chto Delat, Factory of Found Clothes, and the participants of the 48 Hour Communal Life Seminar in a frame work of the exhibition of Chto Delat? – “What is to be done between tragedy and Farse?”

Developing the model of Bertolt Brecht’s ‘learning plays’ (educational didactic perfomances centered around certain conflicts with no fixed texts, involving public to develop and articulate their own position. The primary purpose of these performances is for the all participants to acquire and advocate their attitudes.) – the collective Chto Delat? practices this theatrical exercises as public presentation based on 48 hours seminar-communes.

For their play at SMART project space the collective offered the participants to discuss the topic “Where has Communism gone?”

This question refers, firstly, to the Russian revolutionary writer Andrey Platonov. It was the hero of this novel “Chevengur”, who suddenly awoke from a dream in the middle of the night asking where has socialism gone and searched for it as if it were an object, a thing which supposedly belonged to him. Socialism or communism is thus a matter of desire, and this kind of desire, as Fredric Jameson says, hasn’t yet found its Freud or Lacan. By posing the question about communism, we aim to explore the nature of this political desire, which, in spite of the fall of what is referred to as “real socialism” or “communist regimes”, is still persistent, at least in the field of contemporary theory and arts.

Video documentation of the Learning play

where has communism gone? The learning play from chto delat on Vimeo.

Article in Metropole M by Clare Butcher – Translation in English 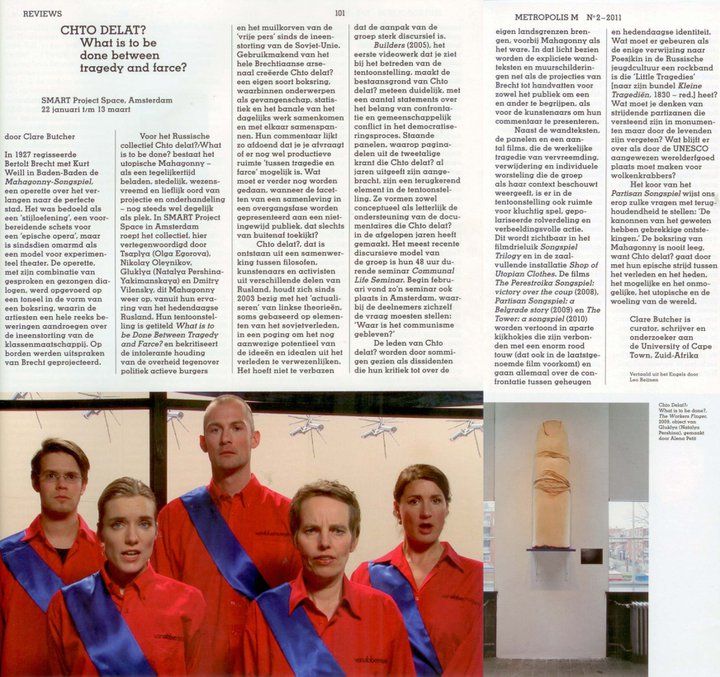