The End of the Line: Historicity, Possibility and Perestroika by Simon Sheikh

published at Afterall Magazine in 2018 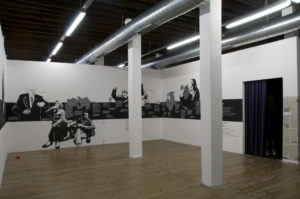 This installation by the collective of artists, critics, philosophers, and writers Chto Delat? (a name that echoes the famous writings of Nikolay Chernyshevsky and Vladimir Ilyich Lenin) reflects through videos and in situ wall drawings upon the notions of social emancipation and collectivism. Referring to perestroika, the process of “restructuring” of the Soviet political and economic system, the work offers a timeline as it were of “what has happened” between 1986 (introduction of perestroika and glasnost by Mikhail Gorbachev) and 1992 (disintegration of the Soviet Union), including the statements on the massive impoverishment of population and extreme forms of nationalism and religious obscurantism leading to civil wars and terrorism. This summary is followed by a hypothetical, analogous chronology titled “What Might Have Happened.” This “what if” list involves imaginaries such as: “The Soviet Union is transformed into a federative state based on broad autonomy of republics, districts, and cities,” and “Workers take full control of all factories and enterprises,” or “Governments fully disarm and unite to create a fund to ensure the future of the planet.” But also: “The West undergoes its own version of perestroika. Inspired by the processes underway in a renewed Soviet Union, western societies carry out a series of radical social-democratic reforms,” a parallel to the proposition of “former West” in regards to the need to rethink the place of the so-called West outside of its self-claimed hegemony in the world. (MH)

here is documentation of the installation 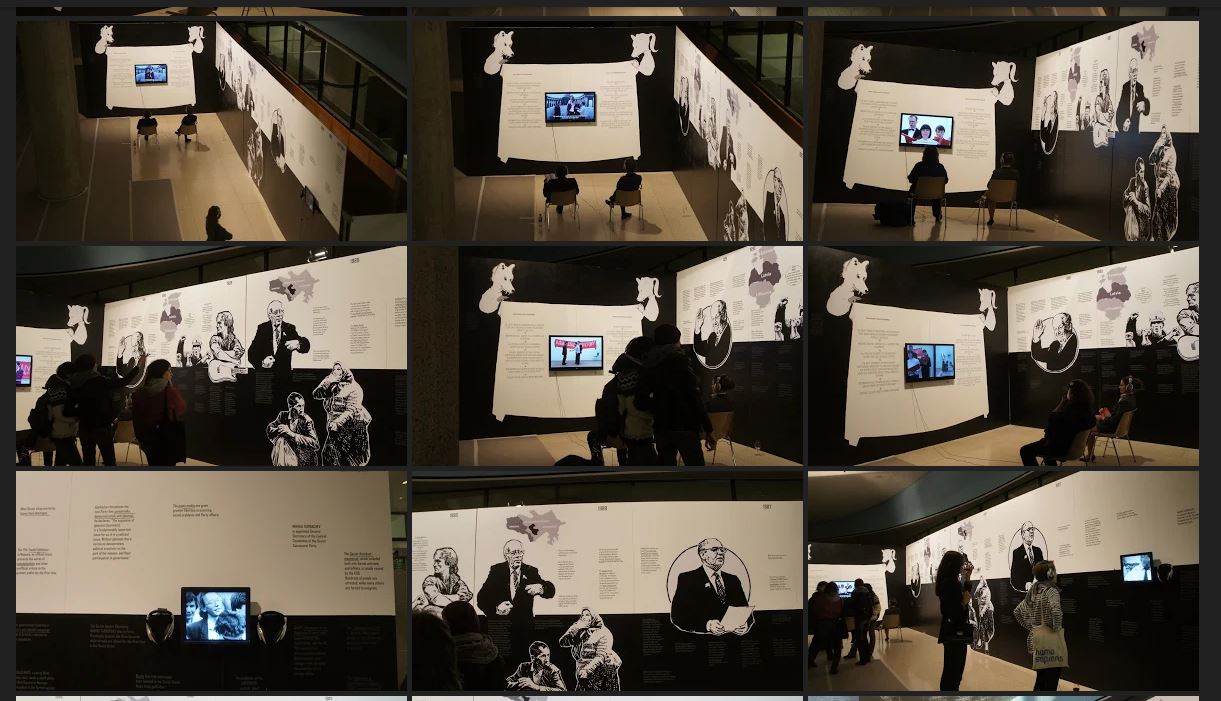 Why Perestroika? History is not given.

‘The true picture of the past flits by’

These words by Walter Benjamin have the most direct possible relation to the phenomenon of the Perestroyka.

What exactly was this experience? And what does it mean today?

Today, nostalgia for all things Soviet is a popular commodity that is so fluid precisely because its underlying experience has already been hollowed out. As the Soviet experience returns in new capitalist packaging, even the right to interpret its history becomes an object of unabashed speculation.

A host of contemporaries is attempting to construct a comfortable image of the Perestroika as unescapable way to capitalism and to legitimate a flimsy power and a shabby everyday. To interrupt the din of this choir, it makes sense to turn to the central question that Benjamin asks in his theses on the concept of history: who is the subject of history? For those who take on the task of continuing the struggle for emancipation, the answer to this question is unambiguous: ‘not man or men, but the struggling, oppressed class itself is the depository of historical knowledge,’ a class-multitude that clearly realizes and rejects the status quo that fetters its lives, dreams, and the dignity and strength of constituent labor: all those who still remember the pride of belonging to the human struggle for freedom.

If we resign ourselves to the history of the victors, this will be a betrayal of the Perestroika experience. But if we are willing and ready to inherit the Soviet project, we need to rethink it as the history of the oppressed, as a battle for the actualization of the emancipatory potentials repressed in Soviet history and particular at the time of its end. Without this paradoxical gesture, we stand little chance of drawing anything positive from the experience of popular power betrayed.

One of the meanings of art lies in its capacity for actualizing the potentials of the past, which we rush to ‘seize hold of a moment of danger,’ as they are ‘becoming a tool’ in the hands of the victors. Creativity draws closer the moment in which the actualized elements of the past interweave with what is taking place in the presence of the now (Jetztzeit), leading to the composition of a new Event.

This text draws upon Walter Benjamin’s ‘On the Concept of History’. The text contains both direct and oblique references to it.

Chronicles of Perestroika / Хроники Перестройки from chto delat on Vimeo.

a film by Dmitry Vilensky; Music: Mikhail Krutik
Running time: 16:46 minuteThe film Chronicles of Perestroyka is based on the documentation of different manifestation at the time of Perestroyka from 1987 till 1991 in Petersburg. Materials are generously provided by the Saint Petersburg Studio of Documentary Films
Special thanks to all camera men who preserved these unique moments of history and to Sergey Gelver, who has saved and is taking care of these precious materials.

What’s Next after Next?

Commentary to a video installation

The installation included video film ‘What’s Next after Next?’ done during discussion at CopenhagenArtAcademy between students of academy (part of them were actively involved with Ungdomshuset (‘Youth House’) movement) and activist of Next Stop Soviet Movement from 1988. Also the part of the installation was a few original films produced during the visit to Soviet Union organised by Next Stop. And graphic panels that were based on the canonic imagery used by Next Stop and Ungdomshuset (these panels were realised by Nikolay Oleinikov and students — special thanks to Alexander Marchuk). 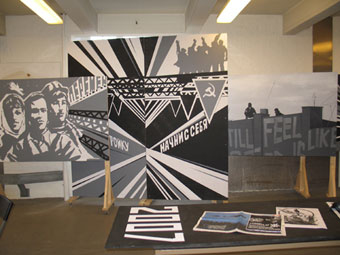 The installation at the show — it was shown at the U-turn, Quadrienalle for Contemporary Art, repeat the discussion environment that was specially produced for making film.

Ungdomshuset (‘Youth House’) was the popular name of the building formally named Folkets Hus (‘House of the People’), located on Jagtvej 69 in Copenhagen. It functioned as an underground scene venue for music and a meeting point for various leftist groups from 1982 until 2007, when it was torn down. Due to the ongoing conflict between the municipal government of Copenhagen and the activists occupying the premises, the building has been the subject of intense media attention and public debate since the mid-nineties.

The idea of the film was to gather around table two generations of Danish activiststhe legendary but now-forgotten Next Stop Soviet and the young artists who participated in my seminar ‘Art and History,’ most of whom also participated actively in the life of the Ungdomshuset. The discussion took place in a specially constructed environment of movable screens on which we had placed iconic images linked to the perestroika era and images symbolizing the struggles of the Ungdomshuset.

Why did I find it important to engineer the semantic collision of these two periods? There were a lot of personal motives. Objectively speaking, however, these are the two major instances of international youth mobilization initiated by Danes. That is, it was necessary to exchange the political experience acquired during such different periods.

I start with two parallel premises. First, there is my personal experience of involvement in perestroika, which to a great extent formed me politically; this experience includes my involvement with Next Stop Soviet. Second, there are my observations of the current conjuncture in Russia. In 2006, the composition of protest forces began to be quite reminiscent of the situation during the early phase of perestroika. That is, I had the sense that time had gone into reverse. Whereas Soviet society moved in the direction of strengthening civil liberties during perestroika, today the situation is evolving in the opposite direction. The suppression of all forms of opposition has as it were sent society back to the beginning of perestroika, when certain things had become possible, but the state’s repressive apparatuses still totally controlled the situation. The difference is obvious, however. Perestroika happened at a rare moment in history when the ruling classes didn’t want to go on with business as usual, but the grassroots were unable to formulate their own common vision of a better society. It was this paradoxical conjuncture that led to the collapse of society, which was then once again reborn as a single-party authoritarian state. The time had thus come to recall the dramatic experience of perestroika.

The case of the Ungdomshuset is somewhat different. It happened in a different period, but this period bears a certain resemblance to perestroika. I primarily have in mind a situation when any interests that don’t fit into the economization of life are sacrificed to profit and imaginary security.

The dramatic defense and demolition of the house in 2006, and the subsequent historical street battles with the police, numerous unlawful arrests of participants, and attempts to find a new house, which mobilized a large number of young people in Denmark and Europe, came to symbolize the continuing struggle for another world, the defense of people’s right not to submit to the total control of biopolitical power. But it turned out that this mobilization had a lot of weak points. It proved unable to exit the narrow framework of identity politics and find a way to appeal to the whole society or to all oppressed groups. I hoped that turning the spotlight on the history of political movements would help us get our heads around today’s problems.

What can we take from history? It was important for me to compare the two periods. To understand the logic of mobilization. To understand what it means to suffer defeat. Later on during the discussion one of the participants said in a fit of anger, ‘We lost everything.’ And the room went silent.

I was amazed by the indifference of Danes to history. The symbols of the revolutionary part — the declaration of International Women’s Day (March 8), which took place at the Ungdomshuset, Lenin’s visit — seemingly have no role at all in the present. The discontinuity of historical experience is obvious, and I think this weakens the movements.

Leftist consciousness is always dramatic. It is built on an analysis of the experience of cruel and often bloody defeats. We learn through the experience of loss. Even history’s seemingly most vivid moments — the Paris Commune, 1917, 1991, and such smaller episodes of struggle as Next Stop Soviet or the Ungdomshuset — are simultaneously defeats. But if humanity can continue to make sense of them, the experience of these defeats proves to be more important than the senselessness of capital’s victories. It is through these defeats that we can genuinely question ourselves and society at large. Each defeat that we have comprehended turns into a pure potentiality that works to create a new historical breakthrough. This is the only way that history is made.

In essence, the only question that remains is this: are people willing to imagine that they make their own history?

1982
Leonid Brezhnev, General Secretary of the Central Committee of the Soviet Communist Party, dies after 17 years in power. The last years of his reign are marked by social and economic stagnation.

1982–1984
The Soviet dissident movement, which included both anti-Soviet activists and leftists, is totally routed by the KGB. Hundreds of people are arrested, while many others are forced to emigrate.
The Leningrad Rock Club is founded. Many popular groups of the perestroika period get their start in the club which was organized under control of KGB.
The Fellowship of Experimental Visual Art (TEII), an association of Leningrad nonconformist artists, is given permission to hold exhibitions, which are a huge hit with the wider public.