Installation of the Activist Club at the exhibition Playgrounds at Museum Reina Sophia, Madrid /2015/ 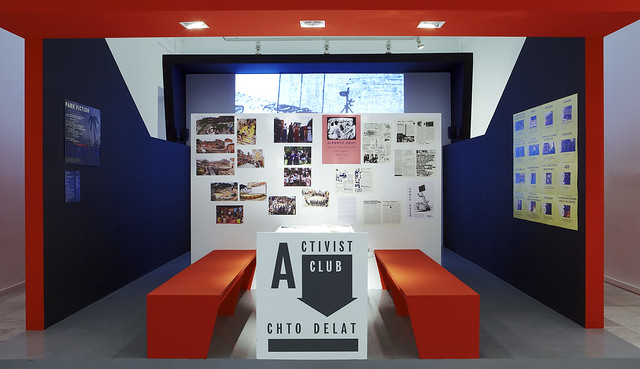 Activist Club at the exhibition “Electrification of Brains” at Motorenhalle, Dresden, 2006

The special issue of the newspaer Chto Delat “Make film politically” was produced and discussed during the opening.

Visiting cultural events is presumably an indolent activity. The public takes an interest in culture, passes its leisure time in museums and galleries, develops its aesthetic taste, acquaints itself with some kind of art work, discussing and acquiring it in the process.
This understanding of culture was formed in the age of the Enlightenment, but today the need is long overdue to reconsider this established form of behaviour in the public sphere and to refuse to perceive culture as something homogenous and servile relating only to the interests of the classes that have the free time and finances to appreciate it.
An increasing number of contemporary artists are searching for new practises for the representation of their activities in the territory of contemporary art. As a rule, these tasks are set by collectives developing creative group ideas and activities, which are not restricted by the spaces afforded by arts institution.

For these groups the traditional places for the representation of art, as a rule, act as an arena, which they can temporarily use for their “creative statements”. For them the exhibition halls of a museum are just one of the places where the propaganda of their ideas and values is possible, a place where they can introduce their own rules of representation based in the principles of participation of education. These intentions date back to the quests made by Russian Constructivism and Productionism, the basic aim of which was to create a new political audience through the organisation of the space and the creation of a didactic narrative within this space. These quests set out not only to orientate the workers on the issues of the political struggle, but also to turn them towards a fundamentally different type of aesthetic experience. The new aesthetic was based on a nurtured dialectic perception of the world that severs itself from bourgeois fetishist consumption. The main emphasis of this aesthetic is on the perception of the aesthetic function of the artefacts, which are intended not for the decoration of life but for the radical transformation of the everyday.

The classic example of such a space is Aleksandr Rodchenko’s “Worker’s Club”. Created in 1925 for the International Exhibition of Decorative Arts in Paris he acquainted Western bourgeois audiences with the completely different method of the aesthetic organisation of the workers’ free time in the USSR and with other ideas for utilising cultural spaces (such as “Lenin’s Corner”, a space for gatherings, the performance of “Live Newspapers” etc.)

Today it is important for us to have a rethink and realise the utopian potential of creating a different type of public space and a different type of free time. We propose the creation of a space orientated towards an active means of interaction with art, which for us, above all includes a different economy of time the transformation of time intended for instantaneous consumption into an intensive time for reading, discussion, analysis and for the screening of films. These very features of the projection of space-time are fundamental for the already existing contemporary alternative cultural scene of social centres, micro-political groups and social forums.

Ideally we see this space as a place that is open to whichever new materials that the active participant-viewers might want to bring into it.

Welcome to the “Activists’ Club” of the “What is to be done?” Workers’ Group.

sketches for flags by Zanny Begg