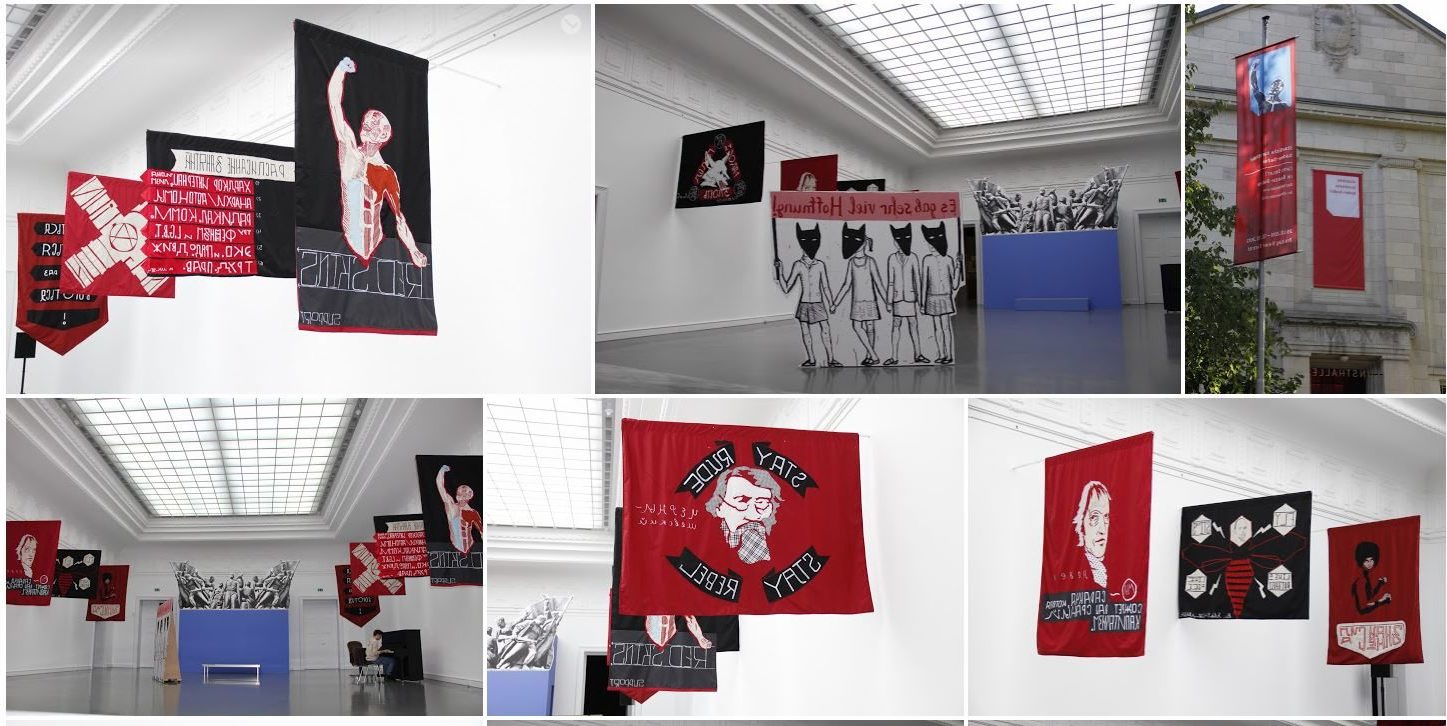 here you can see a full documentation of the show

Introduction to the catalogue by Johan Holten

Whenever mentioning Baden-Baden and Russia in the same sentence one always seems to produce a very specific set of mental images. On one hand these images refer to the historical situation of the 19th century, where Russian elites used Baden-Baden as a base in the heart of Europe, and on the other to a contemporary narrative about wealthy Russians rediscovering Baden-Baden within the past 15 years. Cliche images of a beautiful historical setting combined with young blonde ladies carrying expensive hand bags seem to be the immediate result of mentioning the two together.

But perhaps this clichee can be used as a starting point for a far more interesting investigation into the political and economical situation of present Russia, than one might expect. If the role of a publicly funded Kunsthalle is not merely to exhibit visual products according to this or that category of taste, but rather to participate in public debates by inserting a varied, complex and yet legible set of arguments into it, then attempting to take this clichee image of Russians and Baden-Baden as a starting point for a presentation of the work by the collective Chto Delat? might indeed be one possible starting point.

The collective Chto Delat was formed in St. Petersburg in 2003 as a response to the desolate political climate in Russia at that time. As one of the founding members of the group, Dmitry Vilensky, states in an interview published in this catalogue, it was the very one-sided plans for the celebration of St. Petersburg’s 300 year jubilee, that was the immediate reason for the group to start publishing an alternative newspaper. The project grew and took on a life of it’s own, that soon expanded way beyond this original format. The collective has since participated in countless exhibitions, seminars, panel discussions and other events worldwide. It seems as if there has been a great yearning for Chto Delat’s very specific way of revisiting and examining what the original concept of communism might mean, when applied to the changed modalities of the 21st century. Communism has almost become cool as Viktor Miziano claims in the same interview, a fact which according to Vilensky might in part be the result of the work by this unique collective.

Many comments and texts on this body of work focuses on the impact of the theoretical concept of the collective and less so on the aesthetic qualities, which this concept is being conveyed with. So when planning this first publication ever dedicated solely to the work of Chto Delat it seemed of great relevance to embed the two main texts into a visual documentation of the main projects realized within the past 8 years. The perhaps best known works by Chto Delat are the four songspiels, three of them connected to each other as a triptych, that were realized between 2008 and 2010. The decision to label these political musical videos, in which scenes showing a singing choir, that represents the public opinion, alternates with scenes in which individual actors play roles such as »The Businessman« ,»The Revolutionary«  or »The Artist« , after the Brechtian concept of the »songspiel« , shows the intention to rethink an aesthetic and ideological legacy of the early 20th century at the brink of the 21st century. Yet despite the implications of this quote, the four songspiels do not only impress through their ideology, but also because of the very specific way, that Chto Delat re-produces this legacy. Because the group makes complicated concepts simple and simple concepts complicated visitors watching the four works often find themselves chuckling or even outright laughing in spite of the more than dramatic political and economic content. For the opening of the exhibition in Baden-Baden a fifth »songspiel« will be added to this quartet of works. It will (not yet) take the shape of a video, but of a live performed concert. “The Lessons of Dis-consent”, as it is called, takes it’s title from a piece by Bertolt Brecht, that saw it’s world premiere in the city of Baden-Baden in 1929.

Other sections of the catalogue focus on some of the many other videos produced by Chto Delat. Some use traditional documentary material from the Social Forum in St. Petersburg 2009, while others are based on footage from different types of actions initiated by the collective. Another important section of the catalogue is dedicated to the many spatial installations, that were specifically developed for the exhibitions they were shown in. In Baden-Baden the projections of the various films and »songspiels« will thus also be framed by a specifically developed exhibition design, including amongst others the mural called Perestroika-Timeline documented in this section of the catalogue. Finally some of the numerous editions of the collective’s newspapers are also subject of a section of this book.

In addition to the documentation of works by Chto Delat the interview mentioned above between Viktor Miziano and Dmitry Vilensky provides valuable information about the history and development of the group, whereas the text by Simon Sheikh sets this very unique praxis into the context of what can be described as communist art today.