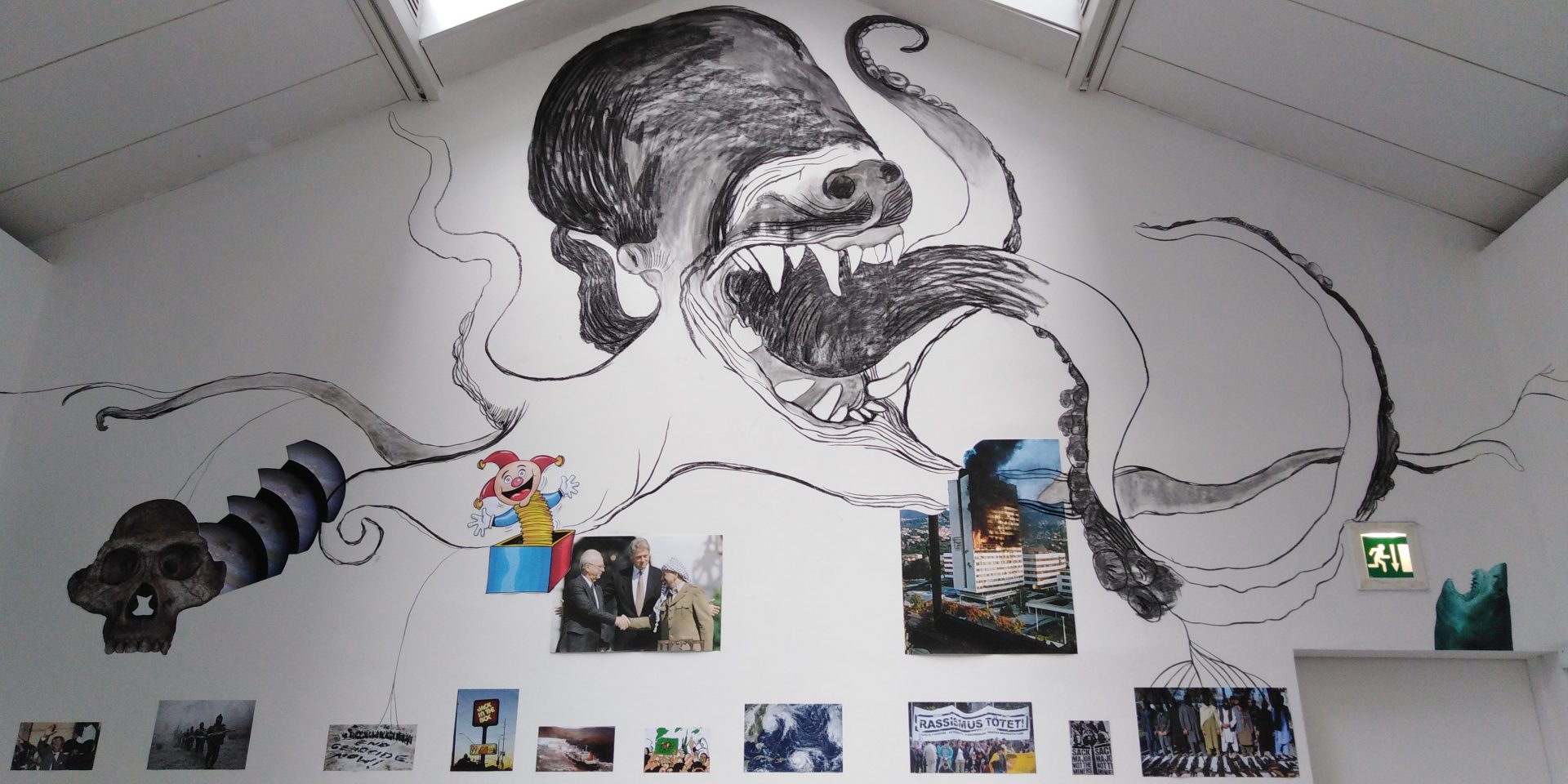 This project of Russian collective Chto Delat utilises the concept of the ‘timeline’ as a provocation to think about who tells history, and the manner in which history circulates. Building from, and in homage to artist collective Group Material’s AIDS Timeline exhibition in 1989 – which sought to frame the history of AIDS within a series of interconnected political and cultural events revealing government and media complicity in the crisis – the project plays with both the productive and problematic outcomes of attempting to revisit or retell history. 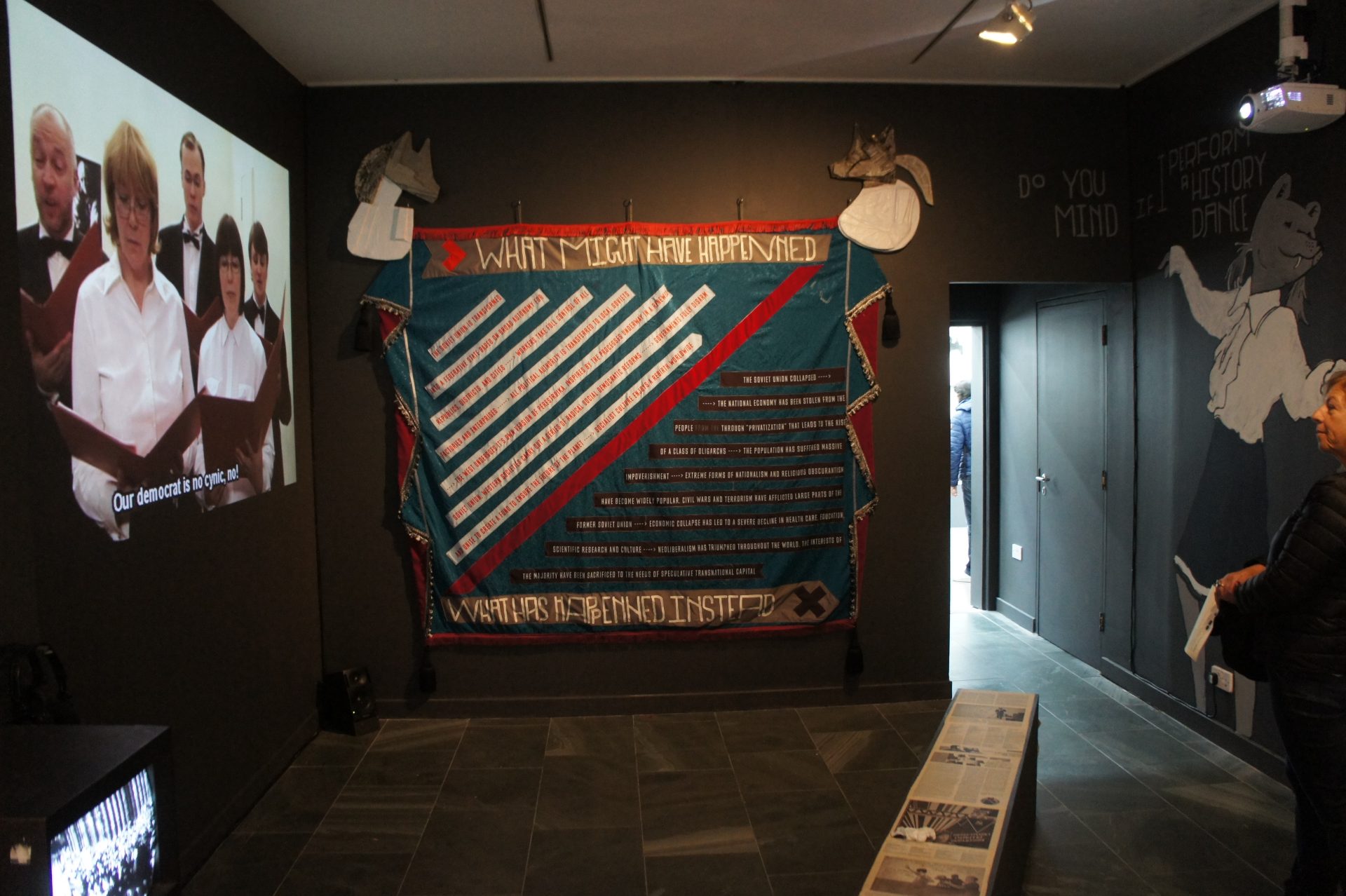 Writing and rewriting history into a single timeline is an impossible task. There is no single version of history, and it is clear that any construction of a timeline holds a relationship to its author. Every step in the creation of a timeline is loaded with subjectivity, bias, prejudice. Chto Delat are interested in showing the fallibility of the timeline, using it as an artistic device to produce new stories and counter-narratives. And as with much of Chto Delat’s work, the process invites the activation of these concerns by visitors and other interlocutors, encouraging responses and disruptions to the problems and potentials of historical reproduction.

In the large space Chto Delat have created a series of timelines, with each metre representing one year from 1989 to the present day. The first layer of times and lines is an ‘existing’ history, with images and quotes pulled from the internet, Wikipedia, other encylopedias, newspapers and so on. These are images often seen circulating in the ‘mainstream’ media many of which have come to represent or signify more than a single event. These images tell a story from one perspective, though many took on new meanings as their use became more and more prolific. Many focus on the idea of catastrophe, or disaster, ways of acknowledging history through economic and human loss. The timeline texts hold different kinds of language, and ways of assigning sides or roles. These timelines take on the bias from global media power, from individual authors, the artistic editorial process, from singular orientations and cultures, and from within a constructed imagination of borders and geographies.

This gathering of times and lines holds many problems, with notable absences and presences. The installation is an invitation to think about how we register ourselves in relation to history, how bias is constructed, what language and tools we use to retell the past. What other kinds of events are important to recollect? Is this really ‘history’ for everyone? How else might we see or feel it? How is a ‘fact’ produced?

On benches and monitors around the space are references to Chto Delat’s work and projects: a catalogue of film and performance and newspaper works – forming their own 16-year timeline of practice and connections to different activist struggles, places of culture and educational projects. Chto Delat’s practice often use performance and collective construction as a tool for learning, and for politicising knowledge. Times, Lines and 1989s extends this approach into the gallery space, aiming to create a space where the performance of the public and the way people use and read images and popular rhetoric is made apparent.

In the first ‘prologue’ space is an installation of images and information edited by Chto Delat of different cultural and political actors who have died since 1989. Feelings of loss and catastrophe are important markers for Chto Delat, and in this installation there is a suggestion that although retelling history is impossible, we also must not forget the past. A textile flag before walking into the large space also suggests a productiveness in reimagining history, as it looks back in order to speculate on the development of a socialist utopia and the transfer of power to the populous in a reformed Soviet Union, instead of the process of Perestroika that led to economic collapse and the triumph of neoliberalism. 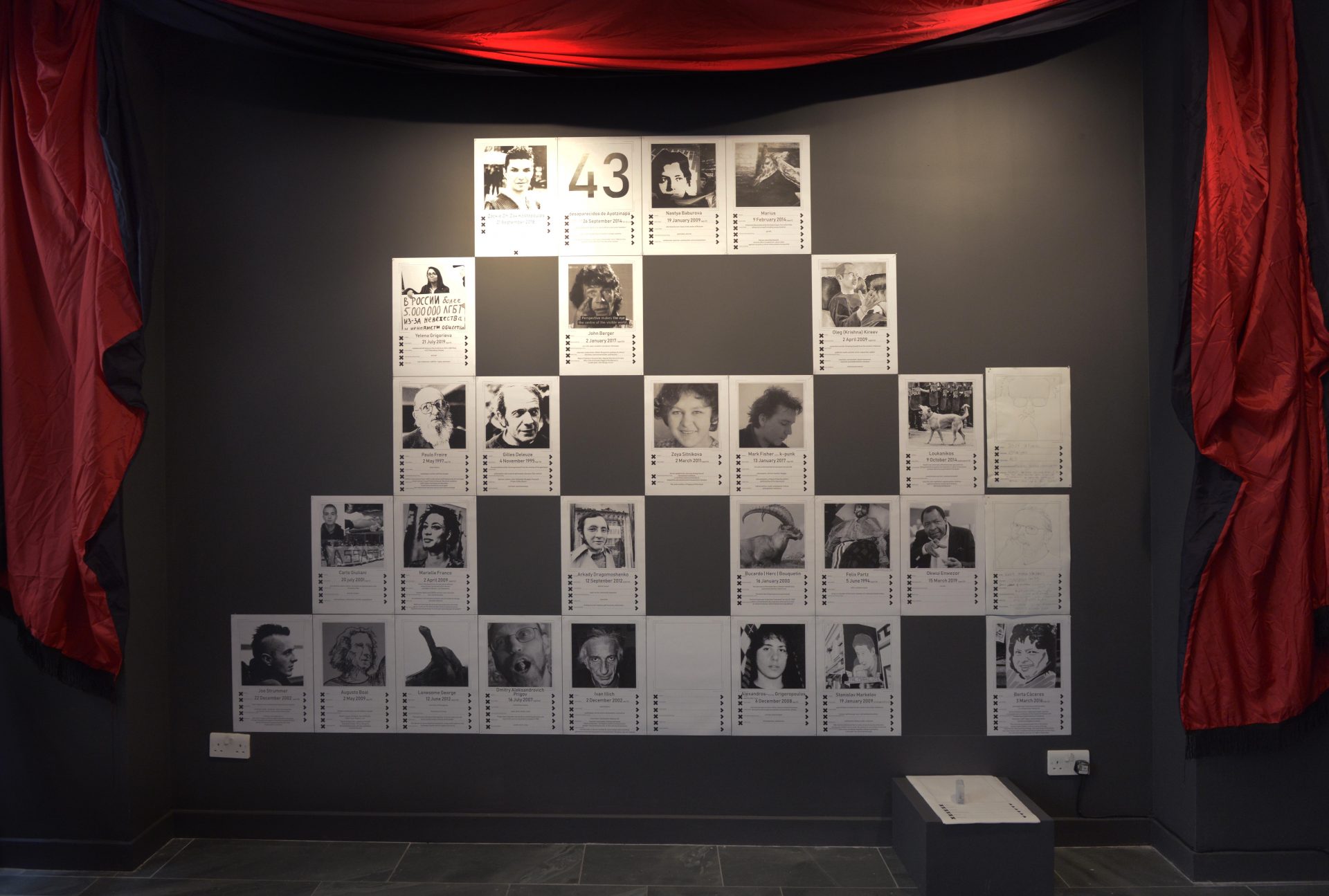 Across the two spaces, the project encourages an appraisal of the last 30 years across different planes of reference, and to map this against what has happened in our own city of Glasgow, first asking how Glasgow has changed in the last 30 years in relation to so called global events. For the last few months, they have sought responses from people around the city, asking each person to choose the most important event to take place here since 1989 and to describe why. These responses, alongside others which have been accrued over a series of events form a new series of times and lines on and around the shelves in the space.

Please feel free to respond through conversation with the gallery attendants, by making an audio recording, discussing at events and film screenings, and by using the tools at the History Making Station. The invitation is to add an event to the Glasgow timeline, whilst thinking about how you register yourself in relation to that event. How else might we tell history to reveal our emotional entanglements and our biases? Who tells history and how? Can we think of other tools for witnessing and sharing these stories?

The show is the part of the program “Some things want to run”, a 15 week performance programme at CCA this summer.