you can see general documantation of the exhibitions, photographs and stills from the film here 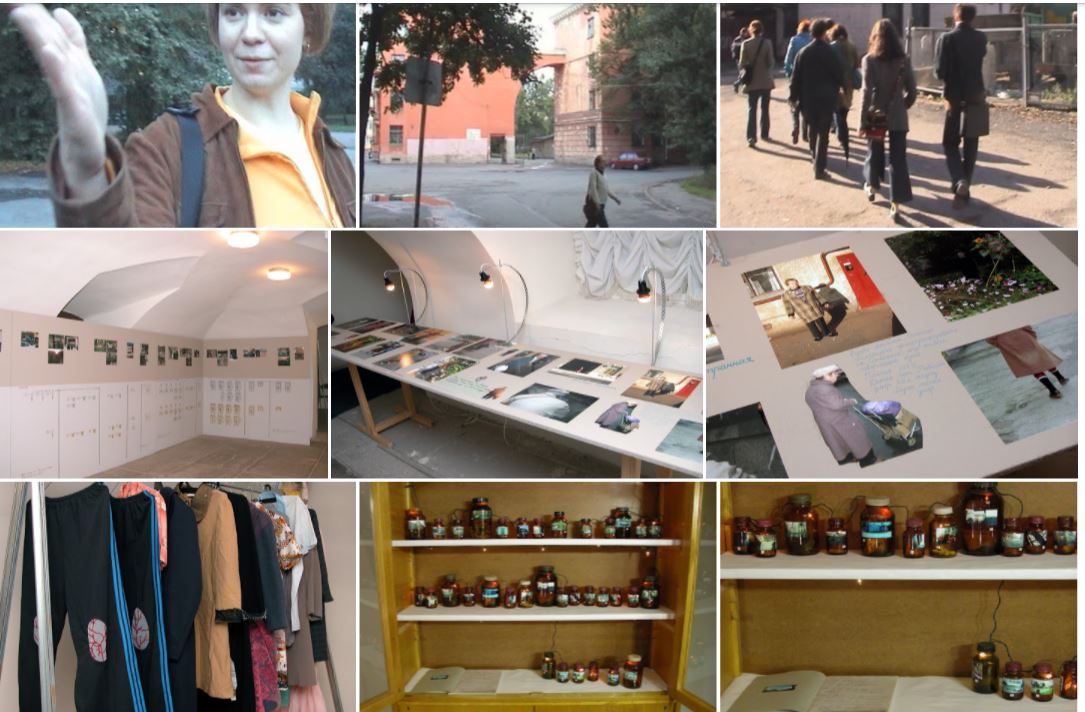 This film is edited from the documentation of the two days drifting process throuh Narvskaya Zastava – legendary constrctivist district in Leningrad. The dift was organised by Chto Delat workgroup in 2004. Film editing based on documentation from  2 cameras done by D. Vilensky

In our examination, we decided to draw upon artistic strategies of the past, strategies that were not only geared toward criticizing everyday life, but moved by the desire to change it. First and foremost, these included the traditions of critical realism, productionism, and situationist praxis.

One of the most important means of examining and intervening in social space is the “drift”. The drift makes it possible to see everyday life beyond the framework of utility coded into the projection of an urban environment. In the moment of drifting, the city can be read as a space of desires stimulated or repressed by the architectural and functional planning of urban space.

The drift’s participants record how some streets, blocks, or building resonate in terms of emotional state, which feelings they provoke and which tendencies they hide. In this way, the documentation of the group’s communication in the process of drifting becomes an important part of the project, revealing the private lives of its participants, their associations connected to the places of its examinations, their comparative analyses, reflections, disagreements and so on.

The three-day drift began on September 3rd 2004 and coincided with the tragic end of the Beslan hostage crisis. These three days were documented extensively in video and photo and later served as the basis for art works and essays.

In the course of the project, we also applied various methods of charting and mapping the social, architectural, and demographic situation in the neighborhood. In collaboration with the sociologist Sofia Tchoukina, we organized a mobile sociological center with their help. This center was set up at a number of different points all over the neighborhood.

The information that we collected in dialogues with the local population was archived through a specially developed questionnaire as well as in video-interviews and photo-documentation. The questions asked in the survey concerned the populations everyday lives. Here are some of them: do you like to live in this neighborhood? How has the condition of the neighborhood changed recently? Which changes have you noticed and how have they affected your life? What are you missing in the neighborhood? What would you like to improve? How does the Narva section differ from other neighborhoods in the city? Is the neighborhood still part of the proletarian periphery? Do you think it makes sense to tear down Soviet era buildings and build new ones? Do you feel the need to express any protest? Etc.

Nikolai Oleinikov’s project was made as an illustration to the sociological study, attempting to find a visual form for the collected data. Based on a part of these questions, Nikolai Oleinikov made a system of pictograms allowing a visual appraisal of the key data in the post-Soviet transformation of the neighborhood.

Guy Debord. Theory of the Derive

Background quotes on the derive

Alexei Penzin, The Last Temptation of the Flaneaur, Chto delat 7

Using both this material and the experience of the derive as a base, the artists of the workgroup made pieces that embodied different ways of interacting with the place through artistic practice.

This film is about the lives people lead in Narvskaya Zastava. Even now, any outside observer thrown into this neighborhood will give in to nostalgic musings on “Soviet life”, or on the contrary, fall into irritation on its behalf. In order to uncover both hidden and obvious ideality of this area, I decided to utilize a methodological pamphlet, used by the lecturers of the “Znanie Society,” a Soviet-era organization that published popular-educational pamphlets and held lectures in public spaces, including factories and other workplaces to raise the levels of both literacy and ideological engagement. This brochure is called “The Soviet Way of Life” (Orenburg, 1974). It details all of the basic principles of the life of a real Soviet human being.

I have transposed this methodological text onto the real, everyday life of contemporary Narvskaya Zastava in three short video-walks around the most important places of the region: around the metro-station “Narvskaya”, along Traktornaya Street , and the Ekaterinhof Park . The main material of these video-films consists of the voices of the people who live in this neighborhood. They are nothing more that passers-by, whose voice we do not usually hear. I have made them audible. 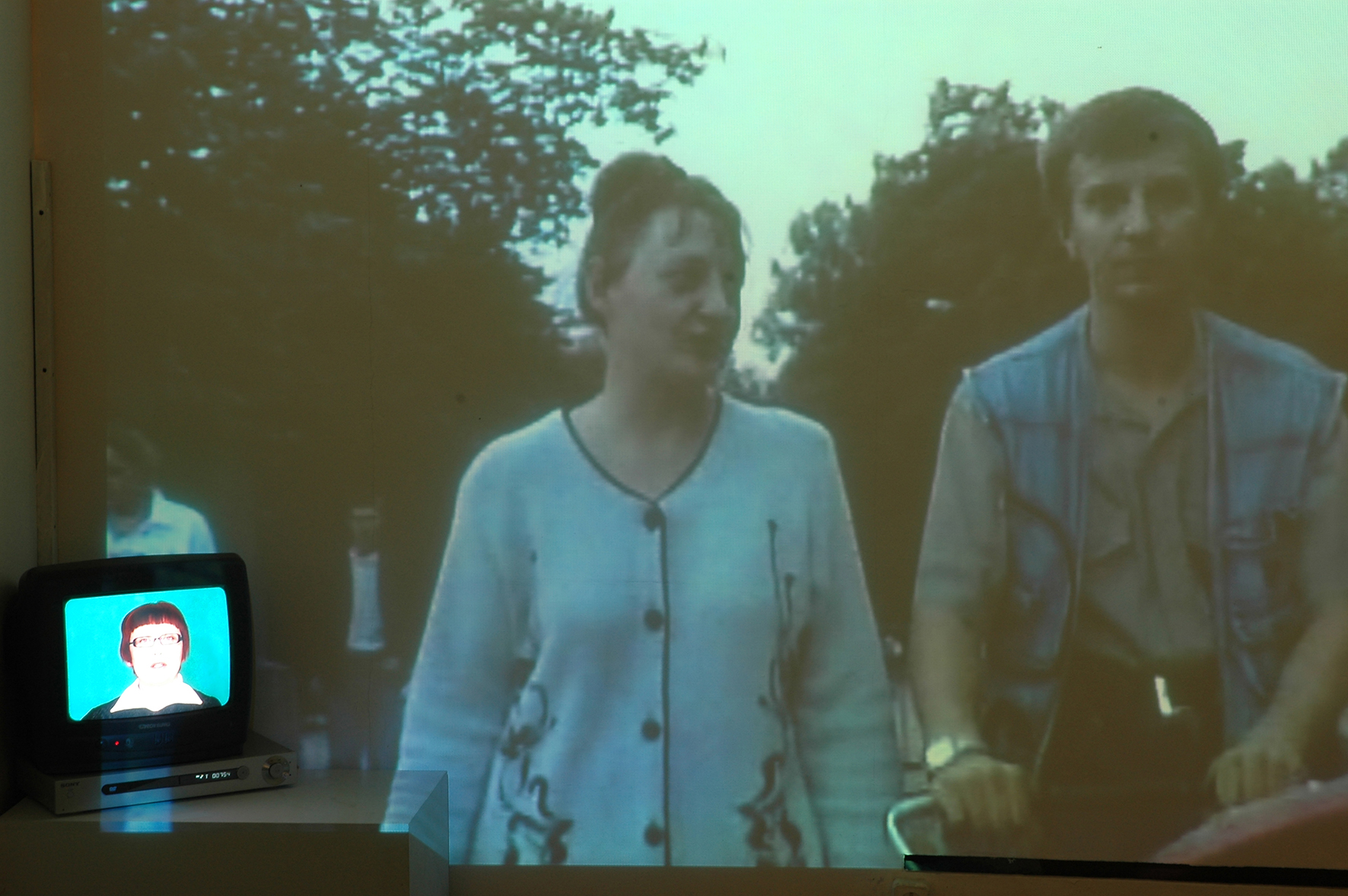 The life of the new, ideal worker demanded a radical replanning of the urban milieu, some of which was realized by Leningrad construvist architects in the late 1920s. However, most of their utopian plans were never brought to fruition.

In his piece, Kirill Shuvalov attempts to imagine the realization of the most impossible dreams of the transformation of the everyday into a joyously playful environment capable of changing the city-inhabitants consciousness. 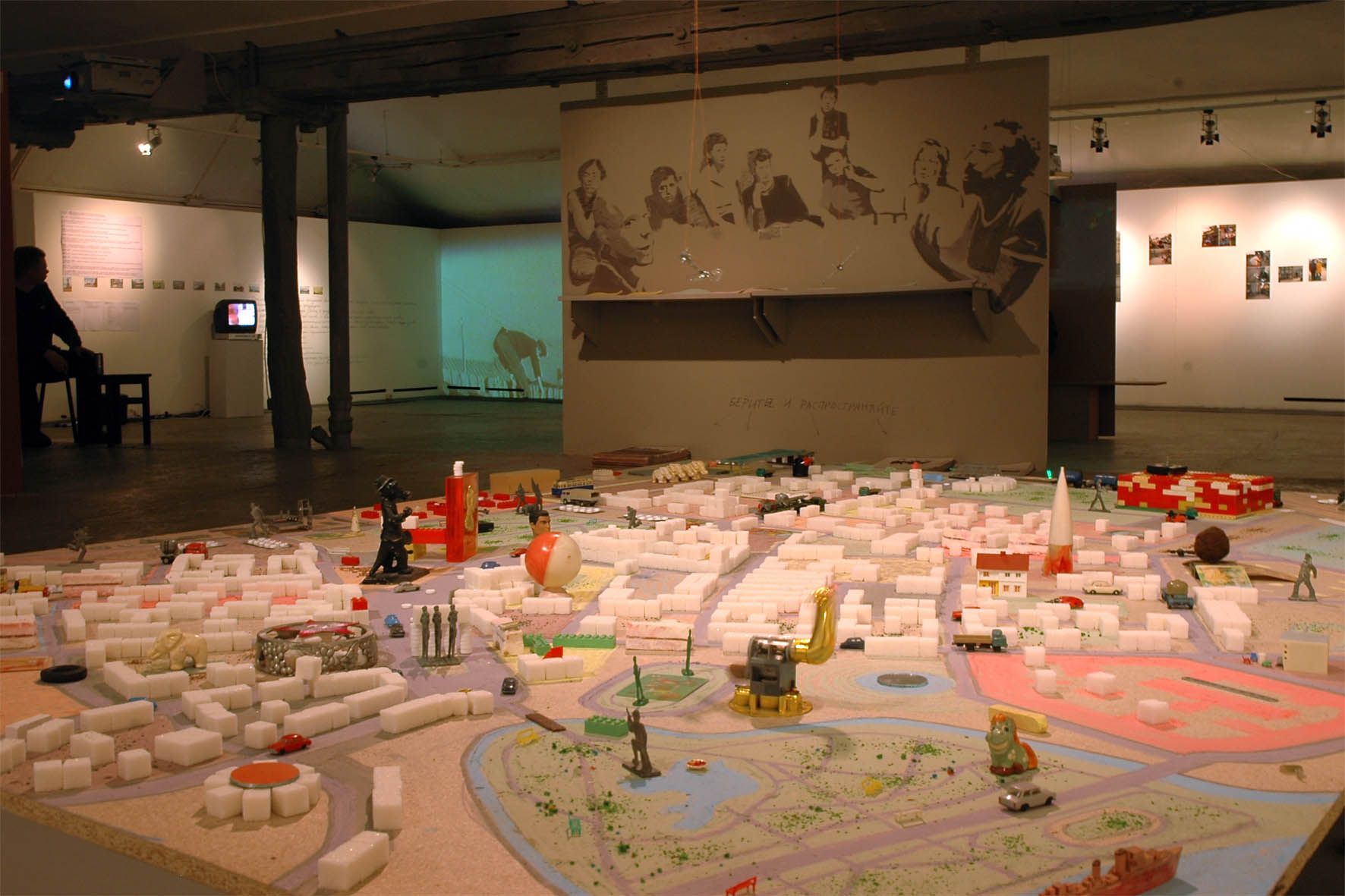 Gluklya. The Strange Never Give Up

The installation consists of a) a table with photographs of the “Strange”. Notes and commentaries, written by hand, b) a clothes-hanger with clothes of a special design, projected to reflect the inner world of the “Strange”. Strolling around Narvskaya Zastava, you can find them everywhere. They are everpresent, coursing through the world’s capillaries like blood cells. Usually, the beauty of the “Strange” goes unnoticed, even if there are far more of them than people who live on the borderline, who have nothing left in common with society at large, such as the homeless, lying around on the asphalt, the “Full-Blues”*, who are hardly strange at all; instead, they provoke feelings of horror, pinching sorrow, pity, or anger. The “Strange”, however, provoke a feelings of surprise and exaltation, maybe because these people continue to exist, despite the inescapable poverty of their fate.Just look at how they dress! Their clothing is armored plating, designed to defend us from the heaviness of reality! There can be little doubt that the life of the Strange is reflected in their costumes. I swear: these people are far freer than the “Full-Blues” or that the “Well-Dressed”. The slight madness of the Strange eloquently tells us that they live in their own world; often, they march forward at a determined pace, busily carrying their burden in an elegant plastic bag 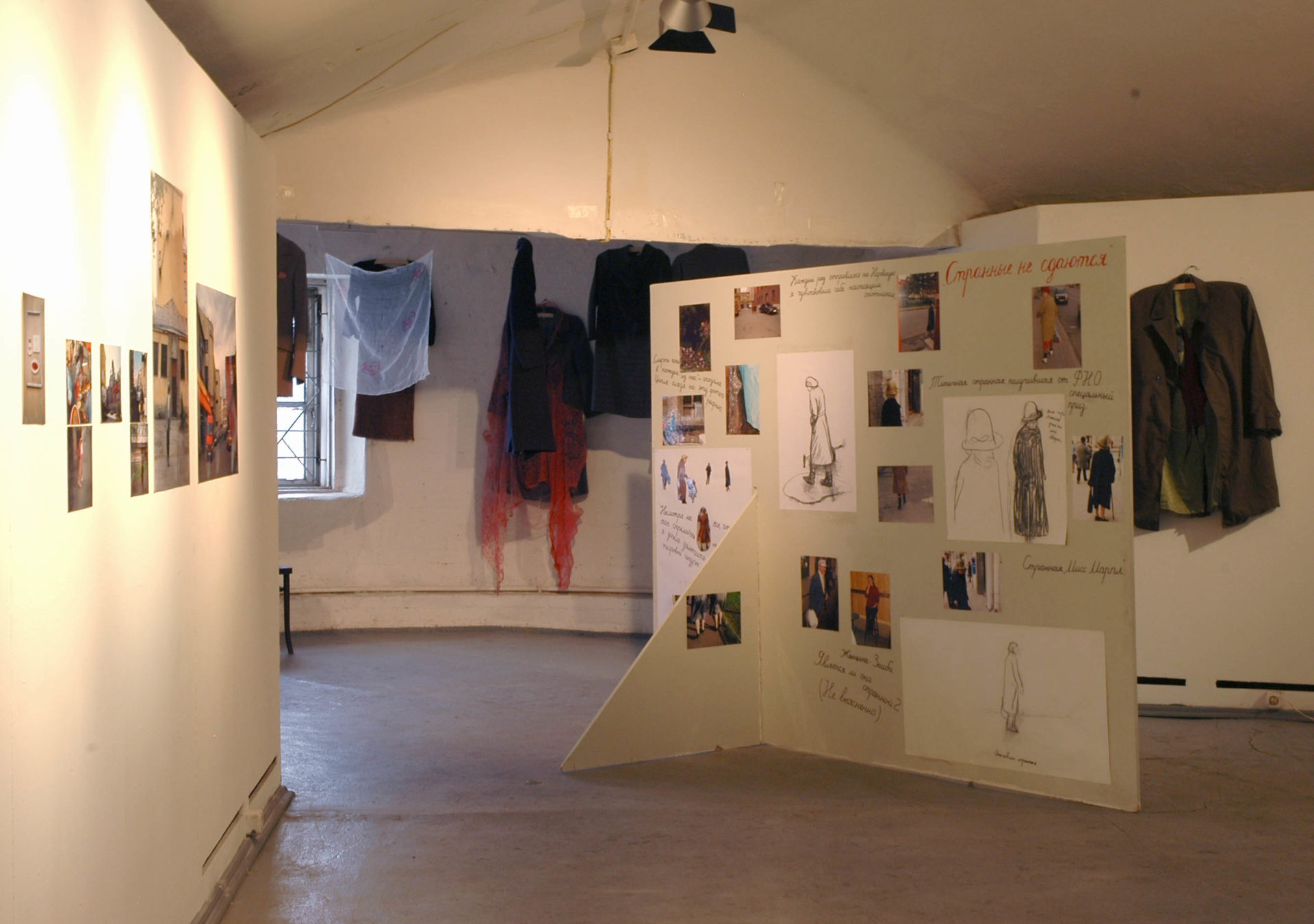 Since I was born and grew up not far from this area, I have been observing life here for a long time. For me, this area is not simply a “bad neighborhood”, a “reservation”, a place of ecological and social catastrophes. Instead, it is loaded with an extremely rich, ambiguous history, interwoven with small snippets of my own biography. Life between Shkapin and Rosenshtein changes so slowly that its transformations go unseen, even for people who rarely visit this place, not to mention the locals who live here permanently. It is as if life here had been suspended and conserved in time, much like most of the local apartment houses, recognized as unfit for housing some time long ago, designated for complete renovation. This conservation  in which renovation is never completed  gives rise to real cultural sedimentations. LIFE AFTER LIFE tells the story of a neighborhood that has survived its own history. Its examination takes place by looking at ordinary, everyday objects which have been withdrawn from use. Having lost their initial designation, torn from their context, these things become the objects of a laboratory examination. Placed into jars originally intended for chemical reagents, labeled with photographs of the places where they were found as well as the local population’s comments, these random objects take on a new quality, having been transposed into a different context. 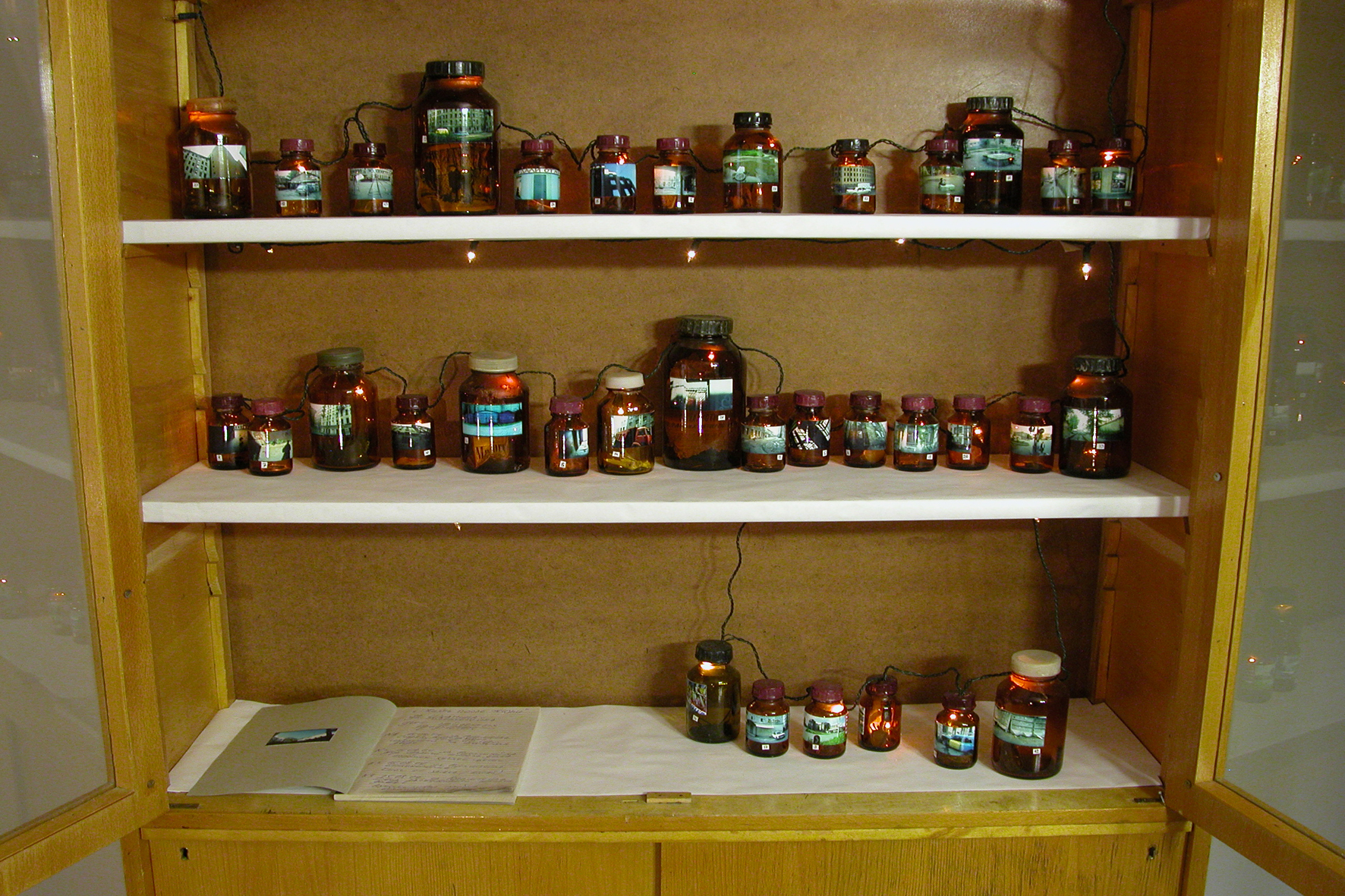 This photo-video installation is based on the documentation of the anarcho-punk squat
‘ENEMA to capitalism’ (Klizma Kapitalismu) made in Petersburg in August 2004. For us was important to discover some local communities that are living and active in this area. The anarcho-punk squat ENEMA to capitalism became one of the focal points of our research.

The sound track of the film is based on the answers that squatters gave on a couple of questions concerning their political attitudes and how people become anarchists in Russia. Then, after the discussion, the one of the squatters  Harlequin  make a short tour around squat explaining the meaning of different objects, graffiti and also make some remarks on the history of place that was the last and most famous squat in Petersburg. It was smashed by a joint attack of police and Nazis at the end of September 2004.