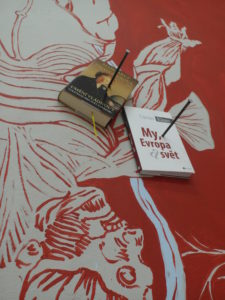 A play in space written & staged  by Chto Delat

With dramaturgy by Dmitry Vilensky

see the documentation of the show here

Video introduction to the show Anti-anticommunism

Video introduction to the show Anti-anticommunism by Chto delat from chto delat on Vimeo.

Being often exhibited at different places we have noticed that we rare (almost never) receive invitation from ex-Soviet bloc countries. We have not properly reflected – why this?

But the first answer lays just on the surface – most of these countries have a strong ban on everything which marks itself as leftist or communist. And of course we understand and respect these objective traumas and in no way support Stalinist and Soviet politics of occupation and repressions. However, today after decades of excessive ideological overproduction of the monstrosity of communism, a general anti-communist phobia has ended in a new disappointment. The liberal utopia, based on the notion of free individuals freely operating in a free market, was demolished by the intervention of the real of the global economic, political and ecological crisis. In this perspective, all the debates about communism not only as an experience of the past, but also as an alternative for the future, became valuable and actual again.

The only problem is that nobody really takes it seriously.

Boris Groys once mentioned that “if there is any attempt today to redefine the art scene, to redefine professional artistic activity, to redefine existential condition of art, then the only possibility of this redefinition is the emergence of a new Socialist/Communist perspective” (in interview with Judy Ditner published at catalogue Ostalgia, New Museum, New York, 2011)

And our collective cannot agree here more. That’s why we always insisted on the possibility of developing
an art which can actualize a most important potential hidden and repressed in Soviet past. That’s why we are part of international net-work of similar minded people who despite everything believe that communism is not just a worst crime against humanity but a complex philosophical and aesthetic system which comprise the best achievements of human spirit, history of the emancipatory struggle and true ethical behavior. How can we prove this mindset with a little help of a small-scale show?

For sure we do not create any revolt in a beautiful Prague (and it is never the case of the exhibitions) but we hope that we manage to raise some attention to the issues we want to speak about – and the show is far away from any forms of blind agitation – just the opposite – we want to share the complexity of the problem, get people a bit of education and of course inspiration to think in old good tradition of dissidence which we all remember from Soviet time and now in a moment of total dictatorship of capital make sense to think and practice anew. We want to remind that things have as a potentiality this totally new desire of communism – the desire which cannot but be shared, since it keeps in itself a “common” of communism, a claim for togetherness, so ambiguous and problematic in human animals. This claim cannot be privatized, calculated and capitalized, since it exists not inside individuals, but in between them, in between us, and can be experienced in our attempts to construct this space in between, to expose ourselves inside this “common” and to teach ourselves to produce it out of what we have as  social beings.