Posted in Performance, Where has Communism Gone? | 0 comments

We are used to the reality principle of one-dimensional liberal propaganda, according to which, nothing can be better than the present state of things, which in fact means the neoliberal economy accompanied by the rhetoric of human rights and legal democracy. They say that communism was a utopian project, which ended in disaster, with violence and totalitarianism, and that the only thing we have left to do is to forget all hope for a better future for society and rather focus on our individual lives, to enjoy this eternal present, to use our possibilities and skills in order to succeed in working our way up a pyramid built of money, trampling the heads of others as we climb.

However, today, after decades of excessive ideological overproduction of the monstrosity of communism, a general anti-communist phobia has ended in a new disappointment. The liberal utopia, based on the notion of free individuals freely operating in a free market, was demolished by the intervention of the reality of a global economic, political, and ecological crisis. From this perspective, all the debates about communism became valuable and actual again, not only with communism as a valuable experience from the past, but also as an alternative for the future.

The only problem is nobody really takes it seriously.

Neoliberal institutions easily give their money to any kind of creative and sophisticated critic of the present, taking for granted that all these debates are based on market exchange, and that all the ideas discussed have their own nominal values. The ghost of communism still wanders around, and to transform it into a commodity form seems a good way to finally get rid of it. Conferences and artistic events dedicated to the idea of communism are going on one after another, speakers are paid or non-paid, advertisement production machines function well, and the sphere turns round as before.

But beyond this exhausting machinery of actualization and commodification, we still have as a potentiality this totally new desire of communism, the desire which cannot but be shared, since it keeps in itself a “common” of communism, a claim for togetherness, so ambiguous and problematic among the human species. This claim cannot be privatized, calculated, and capitalized since it exists not inside individuals, but between them, between us, and can be experienced in our attempts to construct this space between, to expose ourselves inside this “common” and to teach ourselves to produce it out of what we have as social beings.

We invite you to think, discuss, and live through these issues together at our seminar and try to find a form of representation for our debate.

FORMER WEST: Documents, Constellations, Prospects consists of artworks, talks, discussions, rehearsals, and performances in various constellations of documents and prospects that offer a multitude of encounters with the public for negotiating the way of the world from 1989 to today, and thinking beyond. The seven-day period is guided by five currents that feature contemporary negotiations on Art Production, Infrastructure, and Insurgent Cosmopolitanism, with Dissident Knowledges contributions offering dynamic interventions into the ongoing program with artworks, performances, and statements. Finally, Learning Place operates alongside the full program involving students in workshops and inviting them to engage in the week of discussions.

The group was constituted in May 2003 in St. Petersburg in an action called “The Refoundation of Petersburg.” Shortly afterwards, the original, as yet nameless core group began publishing an international newspaper called Chto Delat?. The name of the group derives from a novel by the Russian 19th century writer Nikolai Chernyshevsky, and immediately brings to mind the first socialist worker’s self-organizations in Russia, which Lenin actualized in his own publication, “What is to be done?” (1902). Chto Delat sees itself as a self-organized platform for a variety of cultural activities intent on politicizing “knowledge production” through redefinitions of an engaged autonomy for cultural practice today.

The array of activities is coordinated by a core group including following members: 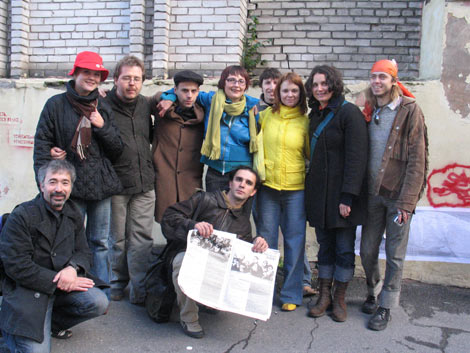 AP: In recent times, the Left has been talking about “resistance”. Ranging from the names of activist groups to the texts of the Leftist press, “resistance” is everywhere. Is this simply a moral position? That is, under the new rigid conditions of neo-liberalism, just when it seemed that all was lost, we will continue to stand up for what we believe is right. If we articulate our resistance in the sphere of culture or in everyday life, it is because we don’t have the possibility for expressing our protest in politics, not to mention for changing the situation in any cardinal way through our actions. To me, this seems like a hidden trap. First of all, we derive a colossal amount of narcissist pleasure for our (supposed) non-conformism; second of all, we receive rather tangible bonuses, finding our selves in the system one way or another…