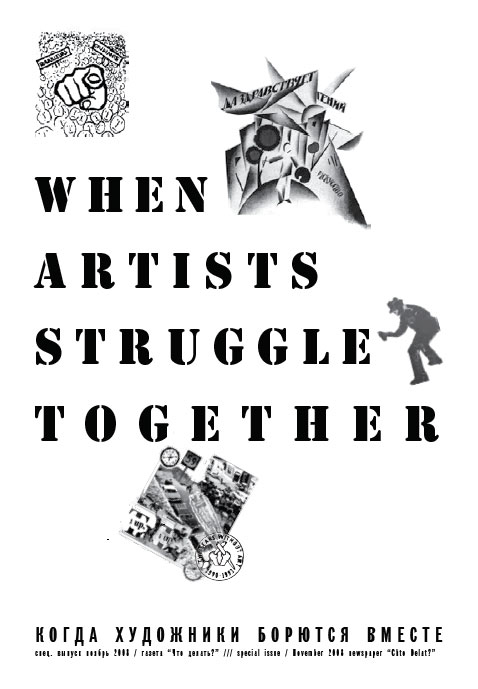 Play for a few Actors

a film by Dmitry Vilensky Music by Mikhail Krutik

Today there is a proliferation of the so-called political art projects. The growing number of the organisers of biennales and other big shows feel it neccessary to be concern with the heavily political issues such as: globalisation, democracy, participatory and communal practices, radical imagination, and so on. But, at the same time we can hardly hear of the appearance of any new art movement, we do not remember any manifestation of collective power of artist and intellectuals that would claim the voice and put a pressure on the system, we never experience any strikes or sabotage that would be directed even against the most disgusting art projects, any personal or collective withdrawal from shows, and the basic issues such as the artist fee has not been resolved despite the fact that most artists do not produce commodities for the market. How do these two trends come together?

If the end is the freeing of man culturally as well socially and economically then the means exist in the destruction of culture.

If the end is the liberation of natural man then the means must be sexual as well as social.

If the end is the totality then the means must be total  all or nothing.

The artists role in the neo-liberal capitalist society is based on the manipulative hierarchic structure which ties them all together as specialized non-specialists (or professional dilettantes). So far the structure is based on the hierarchy and involves endless competition it strengthens individualization and produces alienation.

The artist as a specialist is nothing else but the tool for simulation of social, spiritual and sensual aspects of human life and so to fit the demands of the liberal ideology.

Chto delat?questionnaire When artists struggle together

1.The most exciting collective organisation I know is the publix theatre caravan

(about which Gerald Raunig is writing in his book “art and revolution” https://eipcp.net/publications/republicart4 ) or maybe I should write it was the publix theatre caravan, because the last performance of the theatre group has been shown in 2005 – it was a play about the things that happened in Genova 2001 at the G8 summit, where some of the caravan participants had been imprisoned. I joined the group from 2003 (when we went to a noborder camp in Timisvoara with a noborder lab and with the wonderful publix theatre bus) to 2005, when we created the play I mentioned above out of interviews with people who have been in Genova and showed it in Düsseldorf at the fft (forum freies theater) and in Vienna at the ekh (Ernst-Kirchweger-Haus, an autonomous space, sqatted house in the 80s) and the fluc (a bar in Vienna at Praterstern, which have had a beautiful performance stage at that time).

1. What are (were) the most exciting and powerful examples of collective organization in art?

Marina Grzinic:I can put forward four examples that also mark four different forms of collective organization in art and that bridge three different socio-political and historical periods: the socialist ex-Yugoslavia, post-socialist Slovenia, and the neoliberal global capitalist reality of the present.Going back to the 1970s and 1980s, I would emphasize two different examples. One took place within the Croatian art scene (ex-Yugoslavia), where in the 1970s an important post-hippy/pre-punk conceptually built artistic organization or community was established. I am referring to the Basement artist working community. It really translates this way from the Serbo-Croatian: radna zajednica umjetnika Podrum. Basement implied that artists are workers, especially those whom this status was denied by the socialist ideology.

They were also conceptual artists, and they were involved in the new art practices movement of the time in Croatia. Some names at the core of Basementfor example, Mladen Stilinovicare very well known today. This was an important project that connected countercultural activities and conceptual art.In the 1980s in Ljubljana, Slovenia (ex-Yugoslavia), we had another movement, based on punk ideals and the power of subculture, that was known as the Ljubljana subculture or alternative movement. It was very much connected with the gay coming out scene and clubbing culture of the time. Parallel to it, in the 1980s, NSK (Neue Slowenische Kunsta new Slovenian art collective that consisted of the music group Laibach, the fine arts group IRWIN, and the theatre group known mostly through the theater director Dragan Zivadinovwas being established. In the 1980s, NSK started with a political art project that unmasked the totalitarian ideology. Socialism regulates first and foremost the space of the social through direct control and subordination.

We are excited by the debate that Dmitry brings to the table. This issue is one of the concerns of our actions, of our artistic/political life. Historically, there have been numerous instances of movements that later, under the yoke of postmodern thought, would be reduced to tendencies. The historical movements and classes have almost become myths. This strategy, woven from academic thought, is meant to frustrate any chance of taking over or rethinking the sense of the collective in art and uniting the same context with each and every juncture. In our particular case, in the nineties, we occupied an old house that belonged to a surrealist artist named Juan Andralis, who had died in Buenos Aires in 1994. In this house we researched materials without the mediation of critics, curators or institutions. It was a direct encounter with objects, photographs, manuscripts, and material that was not even edited.